A recent study supported in part by the Emerging Worlds Program examines how natural glasses get their color and could provide insights about an impact crater in Kazakhstan. Rocks on Earth have a range of colors, which are derived from various sources (trace metals, minerals, etc.). Similarly, synthetic glass produced by humans is colored by adding mineral components, or by altering the physical effects of production. Coloration in natural glass, however, is not well studied.

Natural glasses are formed by high temperatures, and can result from friction during seismic activity, cooling lava, or events that release high amounts of energy, such as impacts or cloud-to-ground lightning strikes. Natural glass can be fragile and doesn’t typically last long in the environment.

In 2014, a unique sample of natural glass was recovered from Marquette, Michigan in the USA. The sample is blue in color and is known as a fulgurite, a natural feature formed from lightning discharging into the ground. The material was formed when lightning caused a tree to fall into two high-voltage power lines. This resulted in current traveling through a tree root and into soil composed of sand and clay for an estimated three hours.

The study provides an in-depth analysis of the blue fulgurite found in Michigan, and could help to explain its unique traits. The researchers believe that the blue coloration is caused by the scattering of light in tiny (roughly 100 nanometer (nm)) spheres contained within the glass. The spheres are thought to have been formed as materials separated when melting occurred due to the fact that the material was exposed to extreme heat for an extended period of time.

The only natural analog yet found for the intensely blue Michigan fulgurite is from the Zhamanshin impact site in Kazakhstan. Similar features across samples from the two sites indicate that the natural zhamanshinite glasses may have formed in conditions similar to those experienced by the Michigan fulgurite. Namely, heating that occurred on timescales longer than the split-second flash of a lightning bolt.

The study builds on a growing body of work that compares materials generated by lightning strikes and impact events, and can help astrobiologists better understand the nature and role of impact events in shaping the habitability of Earth. Impacts are thought to have both positive and negative benefits for life. Objects from space could have delivered materials to the early Earth that were necessary for the origins of life as we know it. However, giant impacts have also shaped the biosphere by initiating mass extinction events that have altered ecosystems and affected the course of life’s evolution. 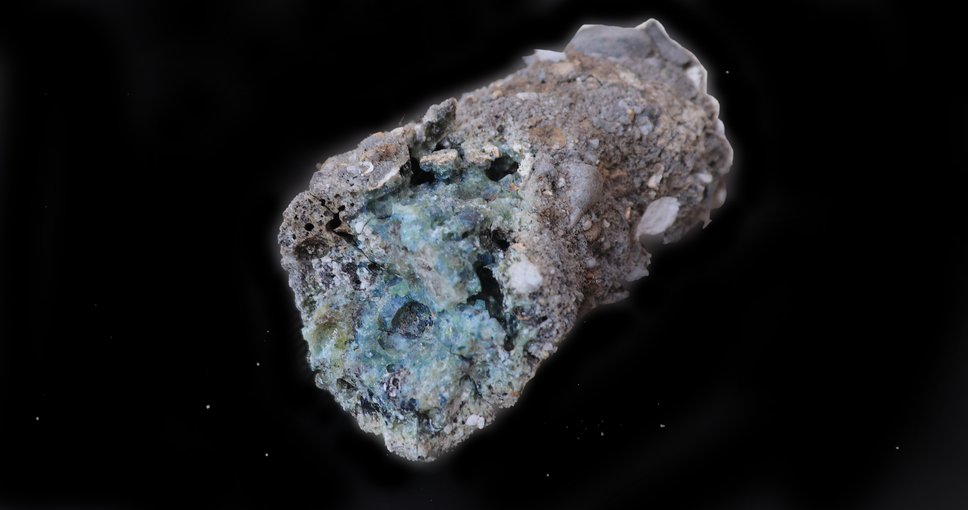 A sample of the blue fulgurite recovered from Marquette, Michigan, in 2014.Image credit: Matthew Pasek, University of Southern Florida (USF).

The study, “The Origin of Blue Coloration in a Fulgurite from Marquette, Michigan,” was published in the journal Lithos. This work was supported by the Emerging Worlds Program. The NASA Astrobiology Program provides resources for Emerging Worlds and other Research and Analysis programs within the NASA Science Mission Directorate (SMD) that solicit proposals relevant to astrobiology research. This research is a critical part of NASA’s work to understand the Universe, advance human exploration, and inspire the next generation. As NASA’s Artemis program moves forward with human exploration of the Moon, the search for life on other worlds remains a top priority for the agency.