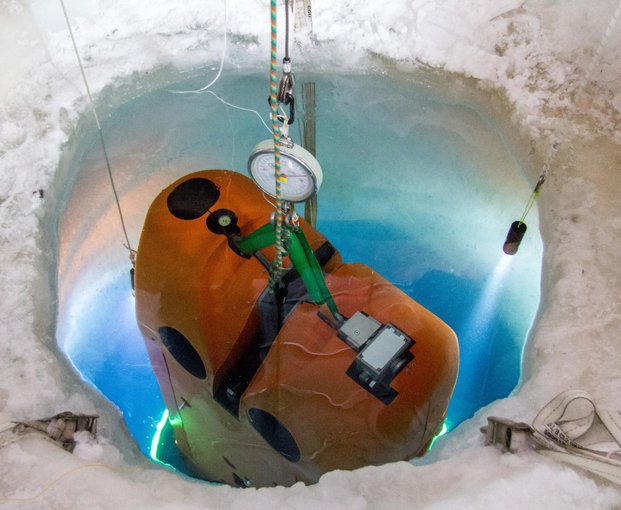 The ARTEMIS submersible vehicle being lowered into the water, where it descended several kilometers below Antarctica's McMurdo Ice Shelf.Image credit: Justin Lawrence/SIMPLE.

Researchers have successfully demonstrated the autonomous docking capability of an underwater robotic explorer beneath the ice of McMurdo Sound, Antarctica. The test was carried out with the ARTEMIS (Autonomous Rovers/airborne-radar Transects of the Environment beneath the McMurdo Ice Shelf) underwater vehicle, and could be applicable to the exploration of sub-ice oceans and sub-glacial lakes on planetary bodies.

Sub-ice oceans on Solar System bodies like Jupiter’s moon Europa are of immense interest to astrobiology as potentially habitable environments. In order to explore these environments, robotic missions would need to enter the water through vertical access shafts. Once beneath the ice, these vehicles would carry out exploration activities, and then return to access shaft for retrieval, data return, and/or battery charging. The ability of a vehicle to reliably return and dock to a specific location is essential for the success of future missions of this nature.

The paper, “The ARTEMIS under-ice AUV docking system,” was published in the Journal of Field Robotics, and presents components of the ARTEMIS docking system as well as results of the field deployment in 2015. The technology was developed with support from the Astrobiology Science and Technology for Exploring Planets (ASTEP) element of the NASA Astrobiology Program. ASTEP was an active program element from 2001 to 2014 and supported investigations focused on exploring Earth’s extreme environments to learn how best to search for life on other planets. The types of projects that were funded by ASTEP are now competed under Planetary Science and Technology from Analog Research (PSTAR).