Around the world, people are banding together to fight the global pandemic that has dominated our lives in 2020. From the bravery of first responders and health workers on the front lines to those of us isolating at home, we each have a role to play in order to help slow the spread of COVID-19. This includes scientists at NASA who have stepped forward to offer their unique skills in any way possible. NASA engineers have turned from space missions to fabricating critical components for medical devices, and astrobiologists supported by the NASAAstrobiology Program have also developed powerful tools to help save lives.

Astrobiology is the study of life’s origins on Earth and the potential for life in Universe. While much of this research is focused on the search for life beyond our planet, the science behind understanding life on Earth has many applications closer to home.

For the better part of 20 years, NASA Astrobiology has supported the work of Steven Benner and colleagues. From his laboratory in Florida, Benner has been attempting to construct what he refers to as ‘alien’ DNA, RNA, and proteins in order to better understand the intricacies of life’s mechanisms on Earth. The biological components that the team is fabricating are not from another planet, they are synthetic material made in the lab using knowledge of biology on Earth. The research provides fundamental information that can guide our understanding of life’s origins on Earth, as well as the search for biosignatures beyond our planet. 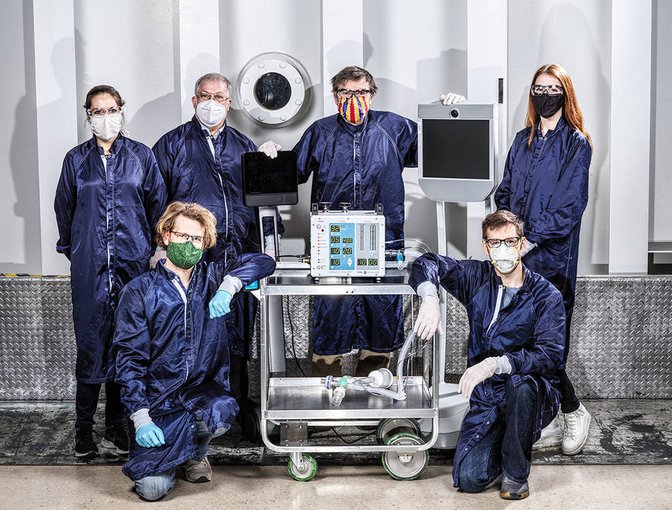 Some of the dozens of engineers involved in creating a ventilator prototype specially targeted to coronavirus disease patients at NASA's Jet Propulsion Laboratory in Southern California.Image credit: NASA/JPL-Caltech.

“We have constructed many different forms of DNA, RNA, and proteins and have shown that they are as equally capable of supporting genetics, metabolism, and evolution as the DNA, RNA, and proteins that you and I share with other terran lifeforms by reason of common ancestry and single origin,” explained Steven Benner of the Foundation for Applied Molecular Evolution (FAME) in Alachua, Florida.

Benner’s research is what is referred to as a ‘bottom up’ approach to the origin of life. His team starts with the simplest components of life, the basic pieces from which living organisms on Earth are built. In the laboratory, they fit these pieces together, constructing larger, more complicated molecules and chemical systems to try and work their way, step by step, piece by piece, from chemistry to biology.

In doing so, the researchers are able to look at other paths life might have taken if environmental pressures had pushed evolution in different directions. For instance, in 2019 the team made a breakthrough in synthesizing a molecular system that is able to store and transmit information much like the DNA found in nature. The ‘Hachimoji’ DNA and RNA they developed suggests that alternatives to DNA-based life might be possible on other worlds. The study, “Hachimoji DNA and RNA: A genetic system with eight building blocks,” was supported in part by the Exobiology Program and published in journal Science.

“Our first contact with alien life is likely to be with ‘alien’ life that we construct in our laboratory,” mused Benner. 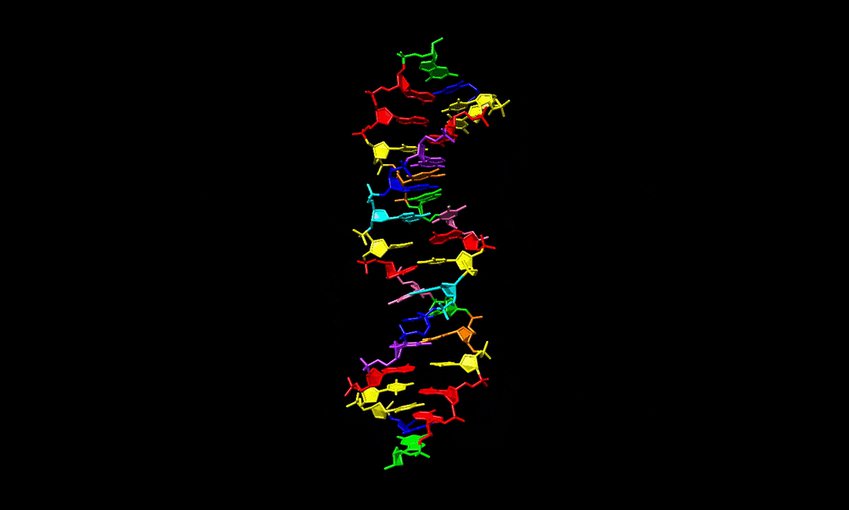 Techniques developed by Benner and colleagues to construct artificial biopolymers also have implications beyond the science of astrobiology. As Benner describes it, this “command over the core biopolymers of life cannot help but have practical value.”

Biology on Earth uses DNA that is built from four basic pieces: adenine, cytosine, guanine, and thymine (referred to as A, C, G, and T). Benner and colleagues have developed synthetic DNA molecules that contain an expanded alphabet of informational ingredients. One of their earlier efforts was found to be useful in viral detection technology that received regulatory approval in China and Canada.

“One of our forms of six letter ‘alien’ DNA went into platforms that measure the load of hepatitis B virus, hepatitis C virus, and human immunodeficiency virus in the blood of patients who are under antiviral therapy,” explained Benner. “We also spun off products that detected 2003 SARS – the first coronavirus pandemic.”

Following that success, Benner and his team developed additional synthetic nucleic acids. The continued research was still focused on the goal of guiding NASA’s search for life in the Universe, but the research was also used in diagnostic technology for another strain of coronavirus, known as Middle East respiratory syndrome (MERS). The team’s work has even branched into products for detecting arboviruses carried by mosquitoes and ticks (such as Zika and Lyme disease).

When the current situation began to develop with COVID-19, Benner and his team recognized the potential need for diagnostic technology. Leaning on their prior experience with SARS and MERS, the group began to put together two kits to detect what is now called SARS-CoV-19 (or COVID-19). The first kit is based on an isothermal amplification platform, and the second uses the polymerase chain reaction [PCR].

“What ‘sparked’ the idea to get involved was simple practicality,” explained Benner. “We wanted to be able to protect our staff, our local community, and everybody else that we could by testing. We were lucky to have the capability to act, and so we acted.”

Because it was a spin-off of the team’s ongoing astrobiology research, manipulating the nucleic acid chemistry to create tests for the virus took only a matter of weeks. This gave laboratory personnel the ability to monitor their own health, which allowed the lab to receive an exemption from Alachua County to remain open.

“Because we are able to test, we are able to protect the laboratory,” said Benner. “So, our astrobiology work is continuing, including work on the origins of life under the direction of Elisa Biondi.” 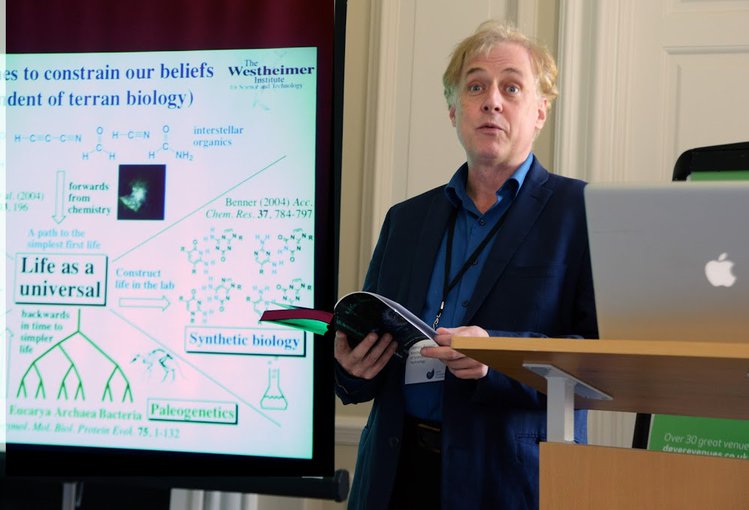 Collaboration Across the Astrobiology Community

One key element of the work in Benner’s lab is a molecule known as the RTX enzyme (RTX is short for ‘reverse transcriptase xenopolymerase’). This enzyme is a critical piece of the chemical reactions that Benner’s team employs, and its development was also supported by the NASA Astrobiology Program. RTX is critical in the replication process of the artificial nucleic acids used in Benner’s lab, and ultimately allows the team to produce functional molecules based on their ‘alien’ molecular biology.

The RTX enzyme was engineered in Andrew Ellington’s lab at the University of Texas at Austin, and was reported in the journal Science in 2016. The discovery was a game changer for molecular biologists working on copying RNA and DNA.

RTX is a type of reverse transcriptase (RT). These molecules are what cells use to copy RNA into DNA in a process known as transcription. RT enzymes read the information in RNA like a ‘blueprint,’ and use that information to build DNA. The pieces of DNA are connected together one after another in a process generally referred to as polymerization – where small molecules are attached together to make a long, chain-like molecule called a polymer.

“The fact that NASA is willing to fund both basic and exploratory research that would otherwise likely not be done provides remarkable opportunities for translation,” said Andrew Ellington. “Based on purely theoretical discussions where we tried to think about what the limits of Earth-based polymerization might be, we took the first steps towards generating a family of ‘xenopolymerases.’”

RT enzymes are a critical component in the process of turning genetic information into the actual molecules cells use to function and survive. There is one important difference between the artificial enzyme, RTX, and regular RT enzymes. RT enzymes do not have a ‘proofreading function,’ so if errors happen when they read the RNA blueprint, those errors get copied into the newly synthesized DNA. In the 2016 study, the research team engineered the error-correcting enzyme RTX. This artificial enzyme is able to proofread the DNA it builds, greatly reducing the number of errors.

Researchers can now use RTX in the laboratory to increase the precision and speed of reactions that copy genetic material. This is incredibly useful when building artificial DNA or, for instance, when copying small amounts of viral material in patient samples in order to identify the presence of a virus.

In this way, the RTX enzyme developed at UT Austin and other polymerases have been critical to the work in Benner’s lab, as well as the work of other teams supported by the NASA Astrobiology Program. This includes laboratories at the Georgia Institute of Technology that have also been using their astrobiology skills to help in our nation’s COVID-19 response.

“The enzyme RTX is proving of great interest in the current crisis in that it serves as a single enzyme solution for RT-qPCR, the gold standard assay for the virus,” said Ellington. “By using only one enzyme we simplify supply chains, especially when there is a surge in reagent requirements, or for resource-poor settings.”

A View to Recovery

The test kits from Benner’s lab are being developed with a number of partners, including One-Stop Medical and Urgent Care in Alachua, and North Central Florida Diagnostics. Much of the production work has been undertaken by GenePath Diagnostics in Michigan and in Pune, India, and filing has been made for emergency use authorization from the FDA in the United States.

Benner’s kits have now been tested in locations far from Florida, including India, and the team is looking at new applications for their techniques. One prospect is the development of decontamination methods and therapeutics to combat viruses directly. Anti-viral products produced using Benner’s ‘alien molecular biology’ have some unique properties that might prove useful with further study.

“The decontaminants are not caustic,” explained Benner, “so you can use them in your eyes, on your hands, in your throat, as well as on surfaces. Our number one goal is to protect our local communities, in part so that astrobiology research can continue.”

Astrobiology is focused on the search for life beyond Earth, yet the science involved has many real-world applications. While astrobiologists look to the stars overhead, their work has, and will have, immediate impacts on the world around us.

“We are able to use NASA-funded science to turn around diagnostics tests in a matter of weeks, and surface decontaminants, prophylactics, nasal sprays, and gargles in matter of months,” said Benner. “This means that NASA-funded science will be able to handle the next pandemic as well as the current one. This will be our most important contribution.”