About Image
With the discovery of an eighth planet, the Kepler-90 system is the first to tie with our solar system in number of planets. Credits: NASA/Wendy StenzelNASA/Wendy Stenzel
Artist impression of the Kepler Space Telescope. Credit: NASANASA
Dec. 20, 2017
Feature Story

Artificial Intelligence Has Just Found Two Exoplanets: What Does This Mean For Planet Hunting?

The media was abuzz last week with the latest NASA news conference. A neural network — a form of artificial intelligence or machine learning — developed at Google had found two planets in data previously collected by NASA’s prolific Kepler Space Telescope. It’s a technique that could ultimately track-down our most Earth-like planets.

The new exoplanets orbit stars already known to host planetary systems, Kepler-90 and Kepler-80. While both are only slightly larger than the Earth, their two-week orbits makes these worlds too hot to be considered likely candidates for hosting life. Moreover, the systems are thousands of light years away, putting the planets out of range of atmospheric studies that could test their habitability. 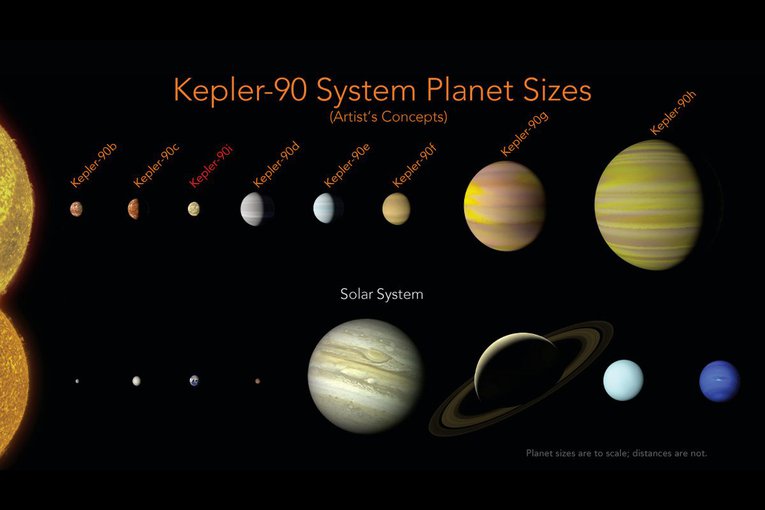 There are now two known eight-planet solar systems in the galaxy. Artificial intelligence was used to comb through the data collected three years ago by the Kepler Space Telescope and its algorithms helped find Kepler 90-1.Image credit: NASA.

With over 3,500 exoplanets already discovered, you might be forgiven for finding these additions underwhelming. However, while other planets in the same system have been known about for several years, these two Earth-sized worlds were previously overlooked. The difference is not a new telescope, but an exploration of the data with a different kind of brain.

The Kepler Space Telescope searches for planets using the transit technique; detecting small dips in amount of starlight as the planet passes in front of the star. As planets are much smaller than stars, picking out this tiny light drop is a tricky task. For a Jupiter-sized planet orbiting a star like our Sun, the decrease in brightness is only about 1%. For an Earth-sized planet, the signal becomes so small it is right on the edge of what Kepler is able to detect. This makes their dim wink extremely difficult to spot in the data.

The discovery paper published in the Astronomical Journal combined the expertise of Christopher Shallue from Google’s artificial intelligence project, Google Brain, and Andrew Vanderburg, a NASA Sagan Postdoctoral Fellow and astronomer at the University of Texas at Austin. The researchers explored using a neural network to shake ever harder to find worlds out of the Kepler data.

It is a technique that is being used across a wide range of disciplines, but what exactly does a neural network do? 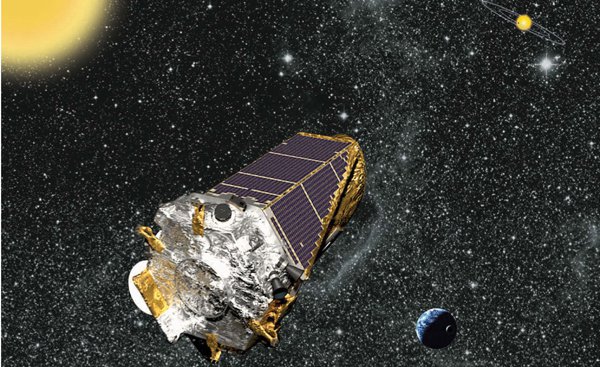 Kepler Space Telescope collected data on planet transits around distant stars for four years, and the information has provided — and will continue providing — a goldmine for planet hunters. A severe malfunction in 2013 had robbed Kepler of its ability to stay pointed at a target without drifting off course, but the spacecraft was stabilized and readjusted to observe a different set of stars. Credit: NASA

Neural networks are computer algorithms inspired by the way the brain recognizes patterns. For example, as a child you learned to recognize buses. It is unlikely anyone sat you down and presented a set of rules for identifying a bus. Rather, buses were repeatedly pointed out to you on the street and your brain found its own set of similarities within these examples. The idea behind a neural network is similar. Rather than telling a computer how to identify a feature such as the dip in light from a planet, the network is fed many examples and allowed to determine the features to get a consistently correct result.

This is a very successful way of developing pattern recognition software, making neural networks one of the newest tools in town used from image recognition to stock market trends. A key strength is dealing with large quantities of data to produce a consistent result.

Kepler has observed about 200,000 stars and another 200,000 will be the target for the Transiting Exoplanet Survey Satellite (TESS) to be launched next year. And if that analysis still looks doable with a bit of elbow grease, the NASAexoplanet archive has just added 18 million light curves from the UKIRT Microlensing survey.

In addition to being slow, humans can also be inconsistent (I once tried to flag down a lorry instead of a bus before I’d had my morning tea). This is especially true when trying to tease out the faint signature of Earth-sized worlds at the limit of the telescope’s capabilities. While Kepler has an automated pipeline to identify likely planets, simulated data suggests it recovers just 26% of Earth-sized planets on orbits similar to our own. Exploring new ways to handle these huge data sets is therefore a top priority.

While neural networks all learn to identify patterns from a series of examples, there are different choices for their structure. In their discovery paper, Shallue and Vanderburg try three different network architectures. The one they find the most successful is known as a “Convolution Neural Network”, which is commonly used in image classification. 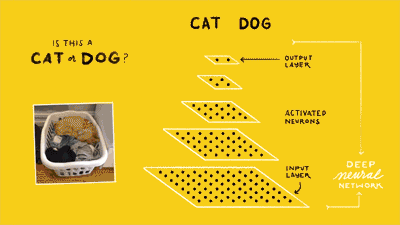 Neural networks are loosely inspired by the structure of the human brain: “Neurons” do a simple computation and then pass information to the next layer of neurons. In this way, a computer can “learn” to identify a dog in an image, or an exoplanet in a KepImage credit: Google.

This utilizes the fact that neighboring data points may form related structures, examining attributes such as the maximum and minimum of small local groups of points to hunt for features. This makes sense when your input data is the light from a star being consecutively dimmed by the passage of a planet.

In this first exploration, the neural network searched for undiscovered planets in known systems. The network found a total of 30 possible new planets, four of which it assigned a probability greater than 0.9 of this being a true detection. Based on the network’s performance when tested on known planets, this level of probability corresponded to a correctly identified planet 96% of the time.

These four candidates were then examined by Shallue and Vanderburg for alternative reasons for the dip in the light curve. Such false positives can be caused by the star being part of a binary system, where the stellar siblings periodically eclipse one another to produce small drops in their combined light. One candidate fell foul of having a close stellar neighbor which may have been causing this effect, while a second candidate showed a light dip that increased over time; an effect not expected by a planet. For the remaining two possibilities, there were no obvious reservations. These were really two new planets; Kepler-90i and Kepler-80g.

While neither new exoplanet is likely to be Earth-like, both belong to intriguing planetary systems. Kepler-80g is the outermost world of a compact system of six planets, all with orbits between 1 – 10 days. The outer five planets form a “resonant chain”; a musical-sounding term that means that the duration of the orbits of neighboring planets are neat integer ratios (in this case, either 2:3 or 3:4).

This orderly line-up is seen in the orbits of the Jovian moons, Io, Europa and Ganymede, and more recently, in the TRAPPIST-1 exoplanet system that hit the headlines last February. Computer models suggest that resonant orbits are formed when planets migrate inwards from a location further out from their star. This is likely how such a close stack of planets exists so close to the star, where we do not expect a lot of planet-building dust and gas.

The second planet hit the media headlines because its addition made Kepler-90 the first known star other than our own Sun to host eight planets. Also like our Solar System, the Kepler-90 planets have the giant gaseous worlds further from the star and the smaller rocky planets closer in. However, these planets all sit within the orbit of the Earth around the Sun, suggested that they too migrated inwards from colder reaches where ice could solidify and help build-up the mass of the giant planets. 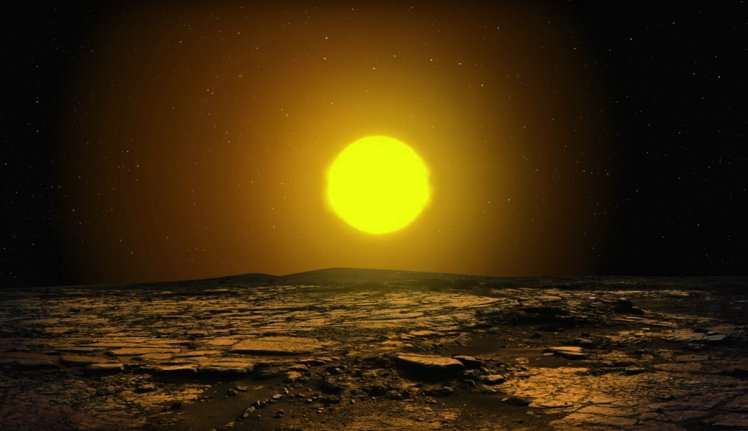 Kepler-90i is 2,545 light-years away from Earth and orbits its host star in 14.45 days.Image credit: NASA/JPL-CALTECH/MSSS.

Notably, Kepler-90i is right at the limit of what Kepler is sensitive enough to detect. This means the system may well have more planets that are too small and distant from their star for Kepler to spot.

In addition to finding these small planets, the size of their planetary systems underscores the potential of the neural network. The evolution of a planet depends heavily on its neighbors. The Earth may have been a dry world if our gas giants had not swept in icy meteorites to deliver oceans to our surface. Mars’s build-up of ice changes substantially over time as the planet’s axis wobbles due to the looming presence of Jupiter.

Such conditions can be modeled, but only if the full planetary system is known. Uncovering the planets around known host stars helps constrain models of how planets form and evolve, and even hint at which worlds may have remained temperate enough to develop life. Picking out the smaller worlds in a starlight signature crowded by other planets is as tricky as spotting a bus in the morning rush hour before tea; it could need this computer algorithm on the job.

Last week’s announcement may show the beginning of a new regime of planet hunting; one where we shake-out the smaller worlds hidden in noisy data. This could provide us both with more small planets and many more multi-planet systems, helping us pin down the most likely places we may find another planet like our own or even one most likely to be completely alien.

Elizabeth Tasker is a planetary scientist at the Japanese space agency JAXA and the Earth-Life Science Institute in Tokyo.