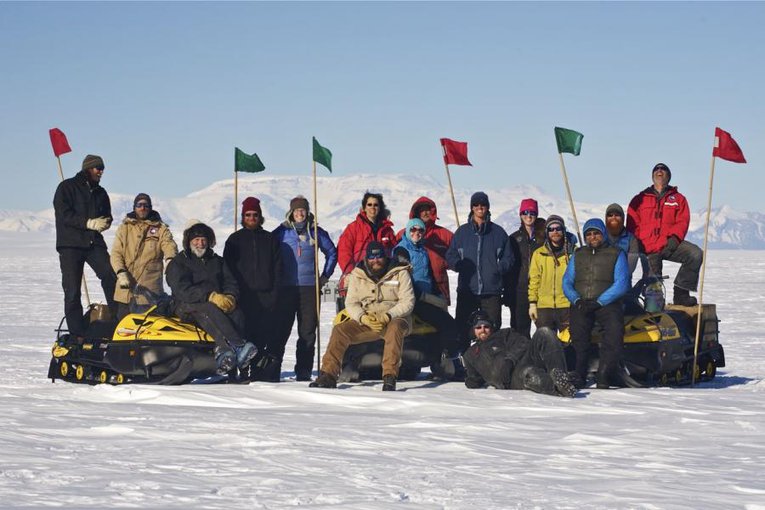 The WISSARD team after the completion of a successful drilling mission into subglacial Lake Whillans.Image credit: Photo courtesy of the WISSARD Science Team.

Methane-eating microbes have been discovered in the first sampling of a subglacial lake in Antarctica, revealing a new and unexpected ecosystem. The finding suggests a possible way for life to survive in the oceans of the outer Solar System moons Europa and Enceladus.

Antarctica’s subglacial lakes are one of Earth’s final frontiers. So far, 402 of these lakes have been confirmed by radar-echo sounding observations detecting bodies of water beneath the surface, as well as satellite-laser measurements. The latter has identified ice sheets slumping and lifting up by dozens of meters, characteristic of active lakes discharging water through a network of rivers, before filling up again. Some of the lakes have been sealed off from the outside world for millions of years.

Although the existence of such lakes was first identified in the 1960s, it wasn’t until 1994 that scientists became serious about studying them with the realization that one notable example, Lake Vostok, is 500-meters deep and therefore a potentially viable environment for life. Yet, accessing these lakes, given the risk of contamination, has proven difficult. It took another 20 years for scientists to develop methods to cleanly drill into one of these lakes to collect samples, with three rival teams aiming to be the first during the 2012–2013 Antarctic season.

The anticipation of which team would be the first to break through into a lake added to the suspense and mounting tension, says John Priscu, a microbial biologist at Montana State University. Priscu is one of the lead investigators of the Whillans Ice Stream Subglacial Access Research Drilling (WISSARD) project, funded by the National Science Foundation U.S. Antarctic Program. His team became the first and only to sample one of the lakes, drilling 800 meters beneath the surface of the West Antarctic Ice Sheet with a hot water drill to break into subglacial Lake Whillans. The WISSARD team was able to extract two samples of lake water and sediment, down to a depth of about 40 centimeters into the lake bed. Taken back to a laboratory for subsequent analysis, these samples revealed a stunning discovery — the presence of highly efficient methanotrophs in the lake.

“I wasn’t surprised that we discovered life in Lake Whillans, but I was surprised by how much life there was,” says Priscu. “There are about 4,000 species, according to our DNA sequence data. We also found a lot of dissolved organic carbon. With all the energy and organic carbon available in Lake Whillans, it should be able to support eukaryotic organisms that were too large to sample.” 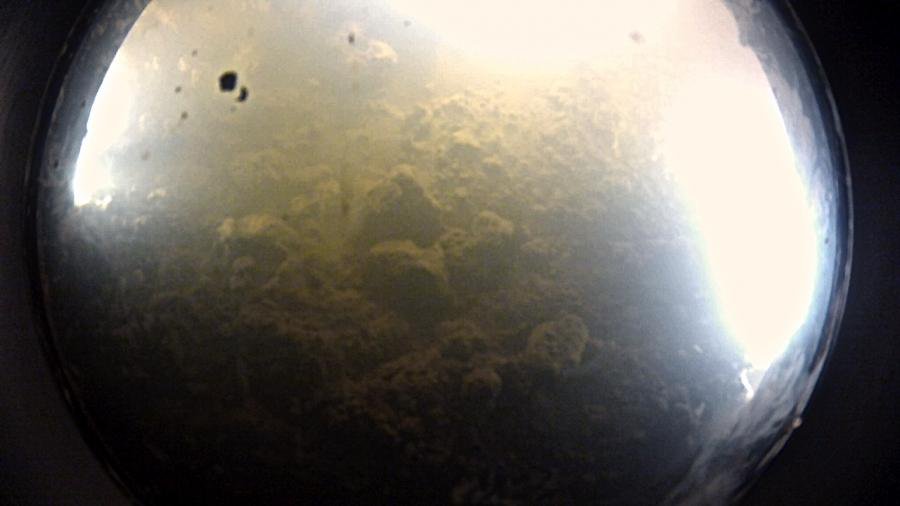 The first view of the sediments at the bottom of Lake Whillans.Image credit: Dr Alberto Behar, JPL/ASU/NSF/NASA.

Priscu’s graduate student Alex Michaud measured the methane concentrations in the lake water above the sediment as being just 0.024 µM (micromolar), but as great as 300 µM in deeper sediment. This four orders of magnitude decrease from the sediment into the overlying lake water clearly reveals that something was sequestering the methane.

Michaud was able to sequence the particulate methane monooxygenase gene pmoA, which codes for a methane oxidizing enzyme in aerobic methanotrophic bacteria. This enzyme lets the methanotrophs use oxygen to strip electrons from the methane mole-cules, oxidizing them and allowing the methanotrophs to extract energy from the me-thane. The gene was identified in the lake water and upper 16 centimeters of the sedi-ment samples, but not in the deeper sediment.

Meanwhile, the oxidation of the lake water was at 12 percent air saturation, meaning that there was enough oxygen entering the lake from the melting of the overlying glacial ice to support this oxidization of the methane. Based on the evidence of the gene sequencing, Michaud’s conclusion is that a methanotroph related to M. tundripaludum, and with a high affinity for methane, is persisting at the interface between the lakebed sediment and the lake water, consuming more than 99 percent of the methane that diffuses up from the sediment.

“This upward diffusing methane creates a unique redox potential, in which an organism can fill the ‘energy gap’ and use the energy to grow,” says Priscu. “The methane is really driving that ecosystem.”

The research was recently published in the journal Nature Geoscience. 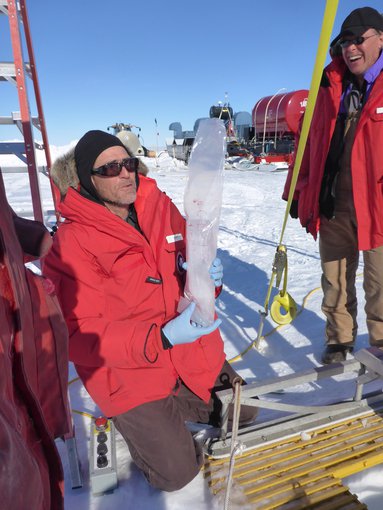 However, a serious problem threatens our understanding of the ecosystem in Lake Whillans. What is the source of the methane? It doesn’t appear that methanogens (methane-producing bacteria) are producing the methane because the team’s DNA sequencing of the upper 40cm of sediment found no evidence for their presence. Michaud and Priscu suspect that the methane is being formed deeper in the sediment by ‘hydrogenotrophic methanogenesis,’ whereby the reduction of carbon dioxide (it gains an electron) coupled with the oxidation of molecular hydrogen creates the methane. Like the oxygen, the bulk of the carbon dioxide in the lake also comes from ice melt (as well as respiration by methanotrophs) but the origin of the hydrogen remains “problematic,” says Martyn Tranter, a polar biochemist at the University of Bristol in the United Kingdom.

Tranter, a collaborator on the WISSARD project, thinks he might have a solution. In a 2015 paper, Tranter and his colleague Jon Telling, a geochemist at the University of Newcastle, proposed that hydrogen can be released by glaciers grinding and crushing bedrock into a fine-grained material known as ‘glacial flour.’ Tranter and Telling are now working together to determine whether this model has some relevance to the mysterious origin of Lake Whillans’ hydrogen, without which methane cannot form in the lake, and therefore the methanotrophs could not exist.

“Even something as microbially unpalatable as quartz, when crushed, can produce free radicals that react with water molecules, stripping them of their oxygen atoms to leave just hydrogen gas,” says Tranter. “Although the process is hard to see [in Lake Whillans] at the moment, it just might be possible that crushing has something to do with the hydrogen that is generated in the sediments.” 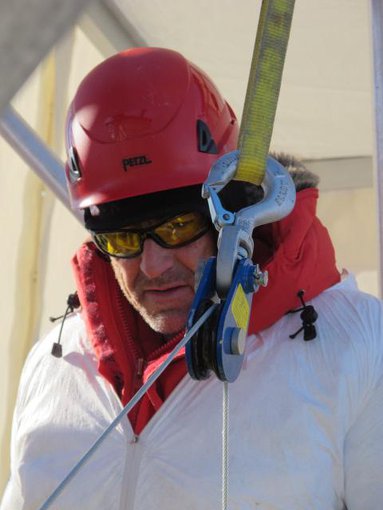 On the icy moons

The parallels between Antarctica’s subglacial lakes and the outer Solar System ocean moons of Europa and Enceladus have become clearer in recent years. In 2012 Priscu, along with planetary scientist Kevin Hand at NASA’s Jet Propulsion Laboratory in Pasa-dena, California, co-authored a paper in the journal Microbe, of the American Society of Microbiology, in which they were the first to set out plainly and convincingly how subgla-cial lakes can act as analogs to those icy moons.

“There are a lot of doubters in the microbiology community about life beyond Earth, but there is everything [that life needs] in the Europan ocean, or beneath Enceladus’ ice cap,” says Priscu.

There are many similarities between Antarctica’s subglacial lakes and the subterranean oceans on these moons, leading some scientists to suspect that they could also share similar ecosystems. These moons have a substantial thickness of ice overlying a liquid water ocean in contact with a rocky core, providing an environment that is energetically favorable for life. All have temperatures below 0° Celsius, at what is described as the ‘pressure melting point’, where the pressure induced by the ice ceiling above lowers the melting point of water. In Lake Whillans the water temperature is –0.5° Celsius, which may be similar to the topmost layers of Europa’s ocean.

“In a Europan ocean, just like in subglacial Lake Whillans, we should have high-energy reduced compounds derived from the rocky core interacting with oxidants entering the pot [from the ice above],” says Priscu.

He describes the environment like a battery, “with positive and negative electrodes through which current can flow and provide organisms with energy to metabolize.”

Tranter concurs, pointing out that if Jon Telling’s model is correct then wherever ice is crushing rock in the alien oceans of the Solar System, the process could replicate the generation of hydrogen. Tranter refers to this as “rocket fuel for microbes.”

While this sounds positive for our expectations of finding marine life on Europa or Encel-adus, both Priscu and Tranter are cautious about drawing literal comparisons between the icy moons and the life found in Lake Whillans. The subglacial lake is but one of hun-dreds in Antarctica, each with its own characteristics of depth; volume; level of contact with the ocean or other lakes; oxidization levels; amount of time submerged; level of wa-ter turnover; and sources of chemical energy. It is quite likely that there will be further dif-ferences between Europa and Enceladus, making one-to-one translations between them and any one lake on Earth unlikely.

Indeed, Priscu suspects “the kinds of organisms that we’ll eventually find out there [on the moons] will be chemo-autotrophic organisms that gain their energy from other chemical sources, such as reduced-sulfur like that found on Earth in deep sea vents,” rather than via the hydrogenotrophic methanogenesis found in Lake Whillans. Yet because the oceans of Europa and Enceladus seemingly share some characteristics with subglacial lakes, it remains important to sample as many lakes on Earth as possible to build a broader picture. 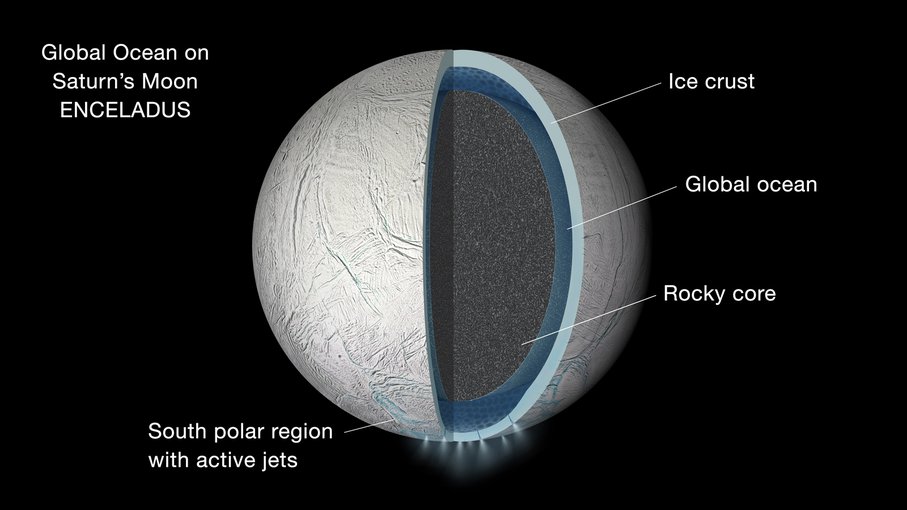 A depiction of the interior structure of Saturn’s moon Enceladus, showing an ocean trapped between an icy ceiling and a rocky bed, much like the subglacial lakes of Antarctica.Image credit: NASA/JPL–Caltech.

To that end, Priscu is heading back to Antarctica in 2018 with the Subglacial Antarctic Lakes Scientific Access (SALSA) project to sample subglacial Lake Mercer. Approximately 1,200 meters beneath the West Antarctic Ice Sheet, Lake Mercer is further south than Lake Whillans, has been covered with ice longer, and receives a third of its water from the East Antarctic Ice Sheet, rather than the West Antarctic Ice Sheet where Whillans is located. This will provide the SALSA team an opportunity to study the biogeochemistry from a different part of Antarctica to see how diverse the ecosystems in the lakes can be. They will test Tranter and Telling’s theory of the origin of the hydrogen and also deploy an ROV (remotely operated underwater vehicle) to take three-dimensional measurements of the lake and characterize the ice ceiling and the lakebed sediment. Of course, the ROV will also be on the lookout for larger, more complex lifeforms.

The subglacial lakes of Antarctica could ultimately be not just a microbiologist’s dream, but also marine biologists’ and astrobiologists’ too. We may be decades away from being able to sample Europa’s ocean, but the ecosystems within the subglacial lakes, sealed off to evolve in relative isolation for millions of years, could provide lifeforms that are unique on Earth. Ultimately, the subglacial lakes could act as signposts for what we might one day find in the Outer Solar System.