Isolated microbes might provide insights about the early Earth. 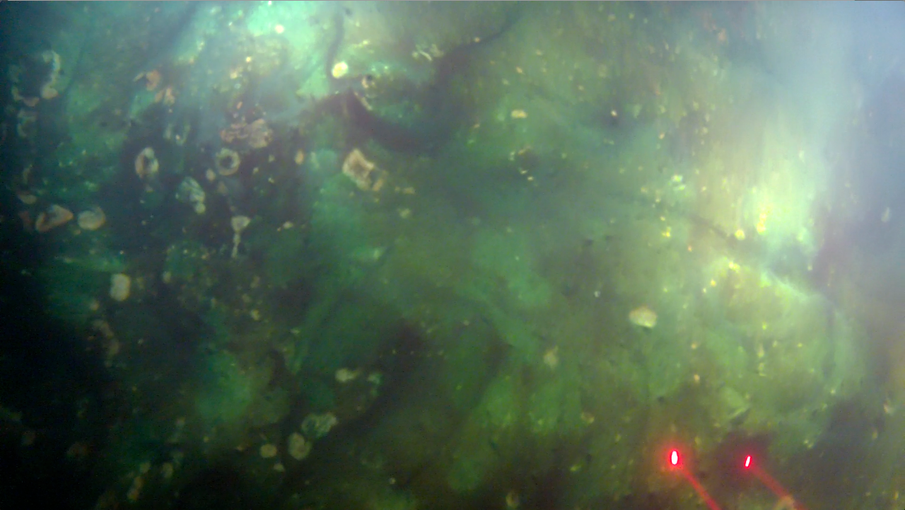 At the bottom of an icy Antarctic lake, a thin, slimy layer of bright green microbes is generating a tiny oasis of oxygen that might give a picture of what early Earth looked like before oxygen became common in the atmosphere. These findings could shed light on the ways scientists might detect evidence of oxygen, a potential sign of life, on distant planets, researchers said.

Nowadays, oxygen comprises about a fifth of Earth’s atmosphere. However, in our planet’s early history oxygen was much rarer. It wasn’t until about 2.4 billion years ago that oxygen for the first time filled Earth’s primordial atmosphere in what scientists call the Great Oxidation Event.

The oxidation of Earth’s atmosphere and oceans, evidence of which has been seen in ancient rocks, is the biggest chemical change on the surface of the Earth that scientists have ever detected, said Dawn Sumner, a geobiologist at the University of California, Davis.

Prior research suggests this spike in oxygen levels was probably due to the advent of photosynthesizing cyanobacteria — microbes that can fuel their lives by turning solar energy into chemical energy. These bacteria were probably the first producers of oxygen on Earth, generating the gas as a byproduct of photosynthesis.

But the microbes that first dominated the Earth found oxygen poisonous, and the Great Oxidation Event forced these microorganisms to develop ways to deal with oxygen or perish. The survivors not only evolved to withstand oxygen, but they even figured out how to use the gas to release energy, just as fires depend on oxygen to help them unlock energy from wood and other fuels.

“Oxygen is really critical to the survival and evolution of animal life,” Sumner said. “The oxygen provides huge amounts of energy through respiration. A lot of my work has been spent understanding the process of the oxidation of Earth, in part to understand how we got here.”

It is unclear the precise steps in which oxygen came to fill Earth’s atmosphere. Scientists have speculated that cyanobacteria at the time may have created “oxygen oases” — isolated areas where oxygen was abundant before it became widespread across the globe — starting as far back as 2.8 billion years ago (400 million years before the Great Oxidation Event).

Scientists have now found what may be the first known modern example of these long-lost oxygen oases. 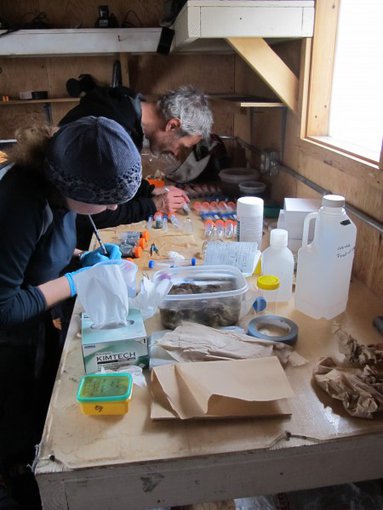 Ian Hawes and Anne Jungblut dissecting and documenting samples of microbial mats from the floor of Lake Fryxell collected by divers. Divers bring samples of the mat to the surface in plastic containers, where researchers dissect them.Image credit: Tyler Mackey.

They investigated Lake Fryxell in the McMurdo Dry Valleys of Antarctica, and detailed their findings in the October issue of the journal Geology.

“When it comes to research in Antarctica, you don’t know what you’re going to find,” said Sumner, who is lead author on the paper. “You keep an open mind, and discover new things that you never would have predicted. It’s a lot like exploring space.”

Lake Fryxell is permanently covered in ice 13 to 16 feet thick. To explore the lake, Sumner and her team typically drill a hole about 7 inches in diameter through the ice, then put down a copper pipe pumped with heated antifreeze to melt the hole larger enough for divers to get through to study the microbes beneath.

“Large animals are extinct in Antarctica because of the glaciation there and its isolation from other continents, so by looking at these lakes, we can look back to a time when ecology on Earth lacked large animals,” Sumner said.

Furthermore, she believes such hearty microorganisms may be similar to the first forms of life that appeared on newborn Earth when it was much less hospitable, and perhaps on distant planets as well.

“By having a better understanding of the early Earth, we can create better models of other places in the Solar System and the Universe,” Sumner said.

The lakes of the Dry Valleys typically contain oxygen in their upper layers, but are anoxic — meaning they have little to no oxygen — farther down. Lake Fryxell is unusual because it becomes anoxic at depths of 9.8 meters, where light still penetrates. 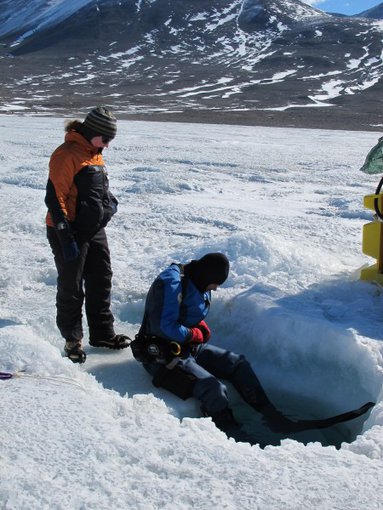 Anne Jungblut, a microbiologist at the Natural History Museum in London, identified the microbes in these benthic mats as cyanobacteria. Green pigments such as chlorophyll are key to photosynthesis, and the scientists found these microbes generated thin layers of oxygen just one to two millimeters thick on top of these benthic mats.

“This discovery was not at all something we were looking for,” Sumner said. “It was a serendipitous find.”

The cyanobacteria in these benthic mats photosynthesize slowly because only a little light makes it down to the lake bottom. Still, the scientists found that oxygen production seasonally exceeds oxygen consumption and the loss of the gas to the surrounding environment. Oxygen accumulates within the mats during the long days of the Antarctic summer, when the amount of sunlight they receive peaks.

The researchers suggest these mats could have generated oxygen oases, and as these mats spread across the planet, they eventually triggered the Great Oxidation Event.

As a next step, the researchers want to return to Lake Fryxell to study how the oxygen-producing bacteria survive the long, dark winter and the how the chemistry changes when the sunlight returns for the long summer.

“Understanding how oxygen is produced and consumed there can help us make better models of the early Earth,” Sumner said.