About Image
An artist’s impression of the rocky exoplanet Kepler-186f, which is one of the most promising candidates for a planet could potentially be habitable, but how similar or different does it have to be compared to Earth to be able to support life?NASA/Ames/SETI Institute/JPL–Caltech
Oct. 15, 2019
Feature Story

Three billion years ago, Earth was a very different place. The Sun that shone on its oceans and continents was not as bright as it is today, and rather than the oxygen-rich atmosphere humans need to survive, methane played a much bigger role in the gas layer that encased our young planet. Despite their differences, this early Earth and our current one have something important in common: they could both support life.

For much of its existence, Earth has been inhabited. But if researchers remotely analyzed the atmosphere of that young Earth, they might have missed the evidence for life.

“The Earth has been many different things,” says Timothy Lyons, a professor in the Department of Earth and Planetary Sciences at the University of California, Riverside. “It is a remarkable story that our planet has maintained habitability for so long.”

Lyons heads up the NASA Astrobiology Institute’s “Alternative Earths” team, in which researchers are characterizing the Earth during different stages in its 4.5-billion-year existence.

“We’re looking at Earth’s past to refine our ability to look for biosignatures [the chemical fingerprints of life] beyond our planet and Solar System,” he says. “It is extrasolar planets that interest us most.”

Currently, there are more than 4,000 known exoplanets and thousands more awaiting confirmation. Scientists are developing remote methods to see if those planets are potentially habitable and maybe even inhabited. The signatures of any distant life will most likely be found in the gases belonging to the atmosphere of an exoplanet. 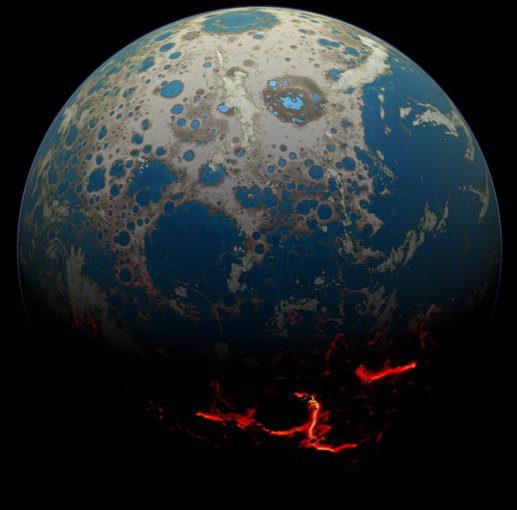 Illustration of what the Earth may have looked like over three billion years ago, when our planet was a very different place, but still played host to a primitive form of life.Image credit: Simone Marchi/NASA.

While Earth is the only place in the Universe known to harbor life, there are many other previous, alternative versions of our home planet, as it changed throughout time, which also allowed life to survive and thrive.

“For more than four billion years, Earth has had oceans, and we’ve had life for most of that time, yet Earth has changed so profoundly throughout its history,” says Lyons.

Through the Alternative Earths research program, the team is able to “take this collected knowledge of the different states of our habitable and inhabited planet and extend this understanding higher – literally – to the atmosphere of a distant planet.”

By combining data from the geology, chemistry, and biology of Earth’s continents, oceans, and atmospheres from different time periods, the Alternative Earths team is modeling what the atmospheres of these early Earths would have looked like based, in part, on relationships with life in the underlying oceans. This ability to model ancient atmospheres and extend the lessons learned to atmospheres around distant planets is vital to the hunt for potentially habitable planets beyond our Solar System.

“The Earth has taught us many different lessons already,” Lyons says. “[Our research] is not looking for another Earth per se. It’s more about looking for the different pieces of what it is to be a planet that can sustain life. Once you know what those processes do on a planet like Earth, you can assemble them into countless other planetary scenarios that may or may not be able to do the same thing.”

Specifically, the team is investigating three different ancient Earths by collecting data from rocks to create a picture of the geology, chemistry, and biology of the planet at those times. The chapters of particular interest span from 3.2 to 2.4 billion years ago, when the earliest forms of life began to release oxygen into the atmosphere via photosynthesis; 2.4 to 2.0 billion years ago, when the ‘Great Oxidation Event’ occurred and oxygen flooded Earth’s atmosphere and oceans; and 2.0 billion to 500 million years ago, when life became increasingly complex, setting the stage for the organisms that would evolve to become the creatures that inhabit Earth today.

“Understanding the evolution of our own planet, including stages of remarkable stability as well as episodes of turmoil, is an essential first step towards understanding the diversity of habitable planets and life that we may encounter in the Universe,” says team member Stephanie Olson of the University of Chicago. Olson specializes in the interaction between the ocean and atmosphere of early Earth. 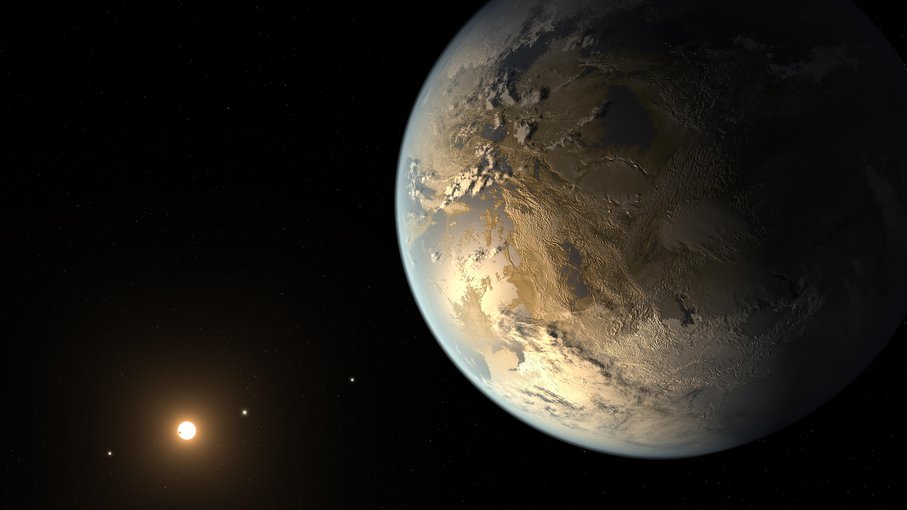 Illustration of the rocky exoplanet Kepler-186f, which is one of the most promising candidates for a planet could potentially be habitable.Image credit: NASA/Ames/SETI Institute/JPL–Caltech.

Researchers can also tweak their planetary models to create an infinite number of blueprints for possibly habitable exoplanets. For example, they can use models that can speed up the planet’s rotation, adjust the tilt of its axis, put all of the continents in one hemisphere (or remove them completely), or allow one side of the planet to face its star continuously. Continents are an integral component of oceans’ habitability. Through the weathering of land surfaces, nutrients enter the oceans to nourish the life within them, and the positions and elevations of these landmasses alter how these nutrients move to and through the oceans.

“These factors also influence the communication between the ocean and the atmosphere, and thus the detectability of life in the ocean,” Olson says. “Understanding how planetary parameters influence biological activity and ocean–atmosphere connectivity can help identify the most promising targets for exoplanet life detection that will be least vulnerable to biosignature false negatives.”

The possibility of false negatives – when there is actually life on an exoplanet but the signatures of that life escape detection – fascinates the Alternative Earths team.

In a 2017 paper led by Chris Reinhard at Georgia Tech, the Alternative Earths team flagged the danger of false negatives in the hunt for habitable planets. The presence of both methane and oxygen in an atmosphere has been viewed as a gold standard in the search for distant life. These two gases should not coexist in appreciable amounts, as they react rapidly with each other, but living organisms can constantly replenish them in the atmosphere, allowing this disequilibrium to persist.

However, if researchers were looking at early Earth over most, if not all, of its history, they may not have been able to detect both methane and oxygen in the ancient atmosphere, despite life being present for much of that time.

“[Detecting] atmospheric methane would have been problematic for most of the last ~2.5 billion years of Earth’s history,” Reinhard and colleagues write. For rocky worlds with oceans, such as Earth, these gases could be recycled within the oceans, rather than being detectable in the atmosphere. This possibility implies that “planets most conducive to the development and maintenance of a pervasive biosphere, such as those with weathering continents and vast oceans, will often be challenging to characterize using conventional atmospheric biosignatures”, they write.

Additionally, even if both oxygen and methane are present, they are not necessarily products of life.

Oxygen can be the result of photosynthesis, and microbes produce methane, but they can also form through photochemical and geological processes. In fact, the NASA Astrobiology Institute has a team investigating methane production via geological rather than biological reactions.

“The products of those reactions could sustain life on an ocean world, but the gases themselves may have nothing to do with life,” Lyons says. “You cannot evaluate what the gases mean without a rigorous context.”

“We typically view habitability as binary: a planet can either support life or it cannot, but there likely exists a spectrum of habitability,” adds Olson. 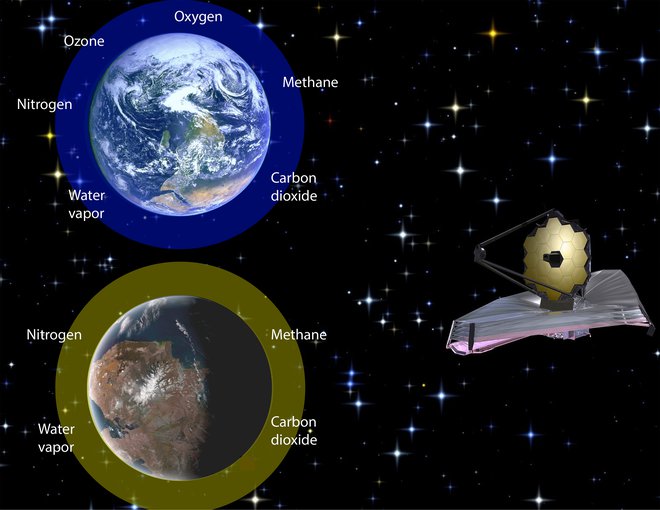 Distant exoplanets may have different biosignatures to present day Earth. NASA’s James Webb Space Telescope will be able to probe exoplanet atmospheres to look for these biosignatures. Could biosignatures from the early Earth give us some clues for what to look for?Image credit: Joshua Krissansen-Totton/NASA.

A proxy for oxygen

Researchers within the Alternative Earths team are combining what they know of the different states of our planet and using their data and associated computer simulations to generate examples of what chemical fingerprints, or synthetic spectra, scientists should be looking for around exoplanets.

Lyons points to ozone and seasonality as particularly important in the search for life on other planets.

“We’re big fans of ozone [O3] because it can be more easily detected by spectroscopic techniques than [molecular] oxygen [O2]” he says. “We want to look for ozone and its temporal variability as a proxy for O2 and its seasonality.”

The discovery of possible false negatives using traditional life-detection methods has pushed the team to think of new and perhaps even more robust signs of life. “That’s been the most fun part,” says Lyons.

While O2 may have been difficult to detect remotely from young Earth, ozone, which forms from O2, may not have been. This is only one example of the many ways in which Earth’s history informs our choice of possible exoplanetary targets for life detection.

However, if astrobiologists want to be able to look for ozone on exoplanets, they need to push for these experiments to be included on future missions.

“We’re only starting to get data from other planets,” Lyons says. “To acquire the right data from these planets in the future, we need to start planning now.”