Home

News

A Wolf-Rayet Bubble and the ...

About Image
The distinctive blue bubble appearing to encircle the star WR 31a is a Wolf–Rayet nebula — an interstellar cloud of dust, hydrogen, helium and other gases. The nebula is created when stellar winds interact with the outer layers of hydrogen ejected by the star.ESA/Hubble & NASA, Acknowledgement: Judy Schmidt
March 7, 2018
Research Highlight

A Wolf-Rayet Bubble and the Early Solar System

A recent study describes how a triggered star formation at the edge of a Wolf-Rayet (W-R) bubble could have led to the formation of our solar system.

W-R bubbles are nebula that surround W-R stars. These incredibly hot stars are relatively rare in the Universe and have an unusual spectra. W-R stars appear to have high surface enhancement of heavy elements, are low in hydrogen, and have strong stellar winds. A large number of W-R stars are surrounded by a nebula, which have a bubble-like appearance. 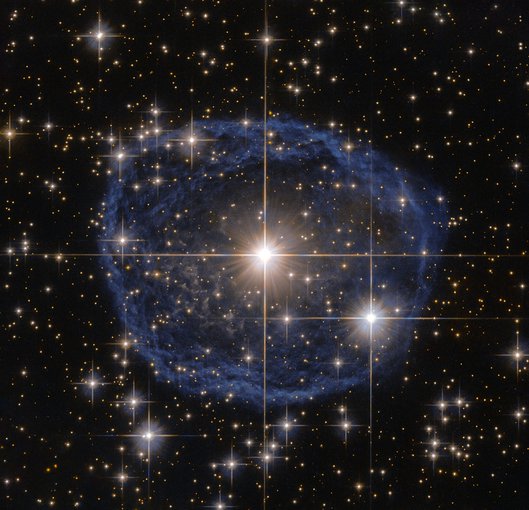 A distinctive blue bubble appears to encircle the star WR 31, and is a Wolf–Rayet nebula, an interstellar cloud of dust, hydrogen, helium and other gases. It is created when stellar winds interact with the outer layers of hydrogen ejected by the star.Image credit: ESA/Hubble & NASA, Acknowledgement: Judy Schmidt.

When the Solar System formed, the ratio of Aluminum (Al) was about seventeen times higher than the Galactic average. At the same time, Iron (Fe) was about two times lower. This is a critical problem in studies of the early Solar System. The team of researchers believes that the abundance of elements could be accounted for if the solar system was actually formed by a triggered star formation at the edge of a Wolf–Rayet (W–R) bubble. The paper outlines a viable model that can explain the abundances of Al and Fe, and estimates that up to 16% of Sun-like stars could have formed in this type of setting.

The study, “Triggered Star Formation inside the Shell of a Wolf–Rayet Bubble as the Origin of the Solar System,” was published in The Astrophysical Journal. This work was supported by the Emerging Worlds Program. The NASA Astrobiology Program provides resources for Emerging Worlds and other Research and Analysis programs within the NASA Science Mission Directorate (SMD) that solicit proposals relevant to astrobiology research.