A View to the Late Ediacaran 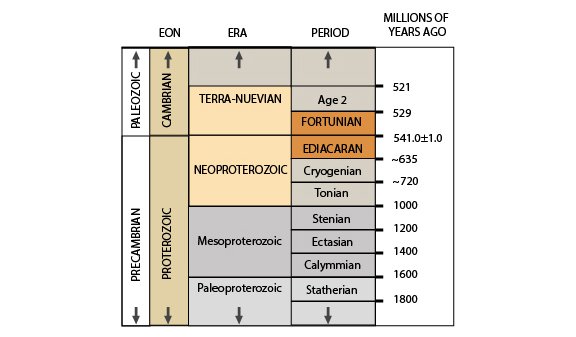 Scientists have performed a detailed sedimentological and chemostratigraphic study of the Dengying Formation at the Gaojiashan section, Ningqiang County of southern Shaanxi Province, South China. The study provides information about the environmental conditions present when sediments in the Dengying Formation were being deposited. It appears that the region overall was a shallow-marine depositional environment, and that the ocean of the late Ediacaran was highly alkaline with extensive marine anoxia (at least in the Gaojiashan Member). The research team posits that these conditions may have facilitated the evolution of organisms capable of biomineralization.

The terminal Ediacaran Dengying Formation is one of only two known places on Earth where Ediacara-type macrofossils are found alongside skeletal fossils of bilaterial animals, and in a series of rock units that are laid in chronological order. This formation is estimated to have been deposited in less that 12.3 million years (from 551.1 to 538.8 Ma). The Dengying Formation could provide scientists with a window to the ancient Earth at the end of the Ediacaran Period. This was an important time in the evolution of life, and marks the point at which communities of complex, macroscopic, multicelluar organisms appear in the fossil record.

The study, “Sedimentology and chemostratigraphy of the terminal Ediacaran Dengying Formation at the Gaojiashan section, South China,” was published in the Geological Magazine. The work was supported in part through the NASA Astrobiology Institute (NAI) element of the NASA Astrobiology Program.