Details of Northwest Africa (NWA) 12379, a meteorite unlike any previously identified 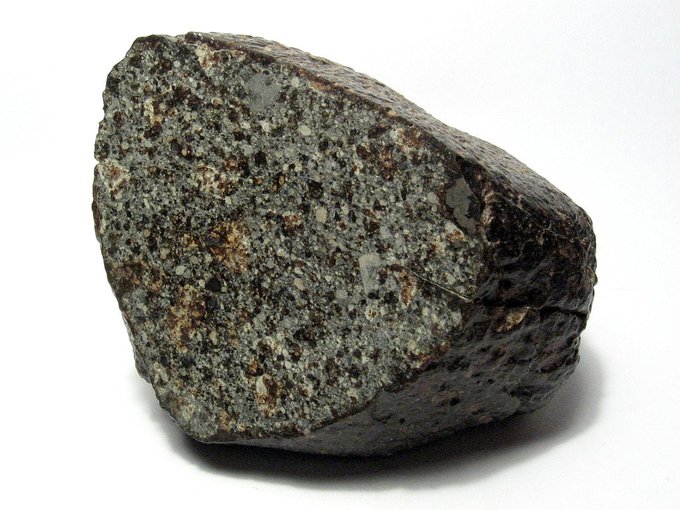 Meteorites can provide important clues about the early Solar System and the conditions that led to the formation of the Earth, the only planet yet known to support life. This image is of the NWA 869 meteorite.Image credit: H. Raab, Wikimedia Commons.

Researchers supported in part by the Emerging Worlds Program have reported the mineralogy, petrology, and oxygen isotopic composition of Northwest Africa (NWA) 12379. This metal-rich chondrite was discovered in Morocco near the border of Algeria sometime between August 2017 and September 2018. NWA 12379 shows a number of unique characteristics that distinguish it from all previously described meteorites. Some features found in NWA 12379 are similar to metal-rich carbonaceous and G chondrites, while others more closely resemble ordinary chondrites.

Meteorites are remnants of the early Solar System, and studying their composition can provide clues about the evolution of planets and other bodies that orbit the Sun. These objects also provide an inventory of the materials that the planets formed from, as well as materials that could have been delivered to the Earth’s surface at the time of life’s origins. Meteorites can help astrobiologists reconstruct the events that shaped the formation of Earth and the conditions that led our planet to become habitable for life. Understanding how life gained a foothold on Earth is important in the search for life elsewhere in the Universe.

The study, “Mineralogy, Petrology, and Oxygen Isotopic Composition of Northwest Africa 12379, Metal-Rich Chondrite with Affinity to Ordinary Chondrites,” was published in the journal Geochemistry. This work was supported by the Emerging Worlds Program. The NASA Astrobiology Program provides resources for Emerging Worlds and other Research and Analysis programs within the NASA Science Mission Directorate (SMD) that solicit proposals relevant to astrobiology research. This research is a critical part of NASA’s work to understand the Universe, advance human exploration, and inspire the next generation. As NASA’s Artemis program moves forward with human exploration of the Moon, the search for life on other worlds remains a top priority for the agency.