A Process for Chondrule Formation in Meteorites

A recent study on chondrules in all three groups of ordinary chondrite meteorites provides detailed constraints on the conditions in which chondrules form. Chondrules are small, spherical mineral grains found in meteorites, and are a major component of chondrites. Understanding how the minerals are formed can provide details about the evolution of the early Solar System. The recent study focused on roughly 650 chondrules cut into thin sections. About 40% had zones: an olivine core (rock forming mineral, often greenish, typically found in igneous (volcanic) rock), which is surrounded by a rim that is low in Calcium and rich in pyroxene. This percentage could be higher due to the angle in which thin sections were cut, and it represents a large number of the total chondrules studied, indicating that there is a fundamental process behind chondrule formation that results in the observed zonation. 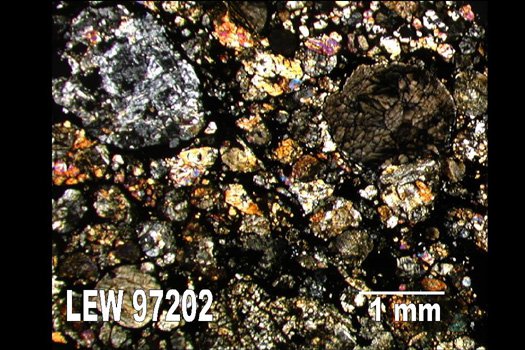 This thin section from the meteorite LEW 97202 exhibits numerous well-defined chondrules (up to 2 mm) in a black matrix of fine-grained silicates, metal and troilite.Image credit: NASA JSC, Tim McCoy.

The researchers believe that olivine chondrules reacted with gas as the parent body of the meteorite formed. This reaction caused the low-Calcium high-pyroxene rim to form. This process could have happened with all chondrules, but persistence of the zonation would depend on whether or not the chondrules were re-heated following formation. Chondrules that don’t show zonation have the same bulk composition as those that do, so re-heating may have caused chondrules to melt, allowing the materials mix back together in a homogenous sphere. This would mean that all chondrules (those with and without zonation) were affected by gas-melt interactions during their formation. The degree of this interaction and melting/re-melting can vary throughout a meteorite.

The study, “Mineralogically zoned chondrules in ordinary chondrites as evidence for open system chondrule behaviour,” was published in the journal Geochimica et Cosmochimica Acta. This work was supported by the Emerging Worlds Program. The NASA Astrobiology Program provides resources for Emerging Worlds and other Research and Analysis programs within the NASA Science Mission Directorate (SMD) that solicit proposals relevant to astrobiology research.