About Image
The 'X-mas Planets' is a collage of computer generated images of potentially habitable worlds created by the Planetary Habitability Laboratory (PHL) over a section of an image of the De Mairan’s Nebula (Messier 43) taken by the Hubble Space Telescope. Earth is at the top right, Mars at the top center. This image was created to celebrate the first year, December 5, 2012, of the PHL's Habitable Exoplanets Catalog.PHL @ UPR Arecibo (phl.upr.edu), ESA/Hubble, NASA
The thin gauzy rim of the planet in foreground is an illustration of its atmosphere. Credit: NASA’s Goddard Space Flight CenterNASA’s Goddard Space Flight Center
Sept. 10, 2018
Feature Story

A National Strategy for Finding and Understanding Exoplanets

An extensive, congressionally-directed study of what NASA needs to effectively learn how exoplanets form and whether some may support life was released today, and it calls for major investments in next-generation space and ground telescopes. It also calls for the adoption of an increasingly multidisciplinary approach for addressing the innumerable questions that remain unanswered.

While the recommendations were many, the top line calls were for a sophisticated new space-based telescope for the 2030s that could directly image exoplanets, for approval and funding of the long-delayed and debated WFIRST space telescope, and for the National Science Foundation and to help fund two of the very large ground-based telescopes now under development. 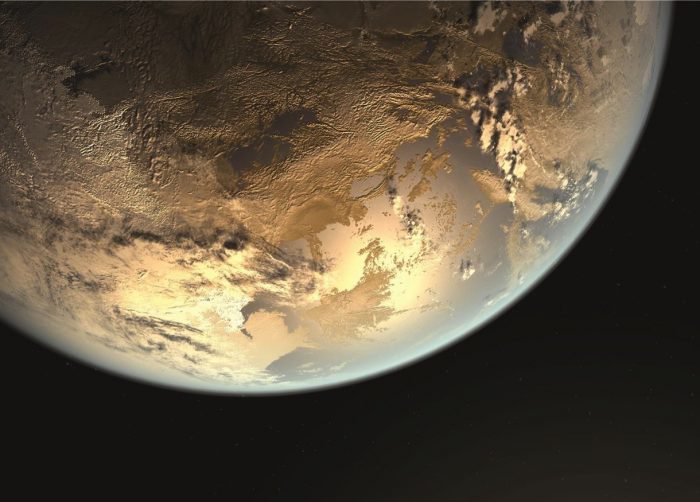 The National Academies of Science, Engineering and Medicine took an in-depth look at what NASA, the astronomy community and the nation need to grow the burgeoning science of exoplanets — planets outside our solar system that orbit a star.Image credit: NAS.

The study of exoplanets has seen remarkable discoveries in the past two decades. But the in-depth study from the private, non-profit National Academies of Sciences, Engineering and Medicine concludes that there is much more that we don’t understand than that we do, that our understandings are “substantially incomplete.”

So the two overarching goals for future exoplanet science are described as these:

Given the challenge, significance and complexity of these science goals, it’s no wonder that young researchers are flocking to the many fields included in exoplanet science. And reflecting that, it is perhaps no surprise that the NAS survey of key scientific questions, goals, techniques, instruments and opportunities runs over 200 pages. (A webcast of a 1:00 pm NAS talk on the report can be accessed here.) 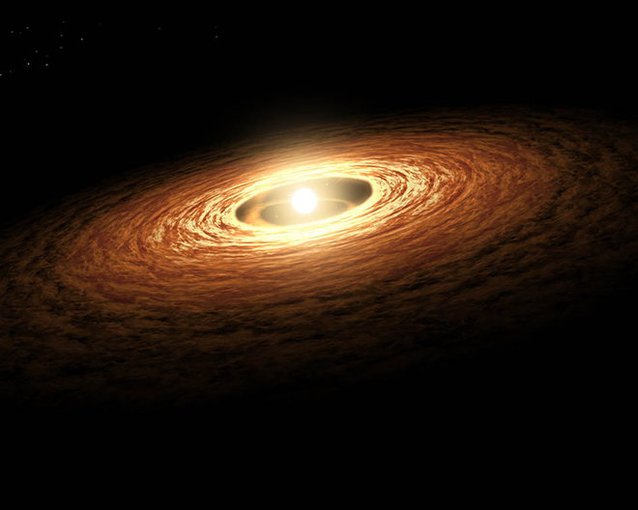 These ambitious goals and recommendations will now be forwarded to the arm of the National Academies putting together 2020 Astronomy and Astrophysics Decadal Survey — a community-informed blueprint of priorities that NASA usually follows.

This priority-setting is probably most crucial for the two exoplanet direct imaging missions now being studied as possible Great Observatories for the 2030s — the paradigm-changing space telescopes NASA has launched almost every decade since the 1970s.

Both would greatly enhance scientists’ ability to detect and characterize exoplanets. But the more ambitious LUVOIR in particular, would not only find many exoplanets in all stages of formation, but could readily read chemical components of the atmospheres and thereby get clear data on whether the planet was habitable or even if it supported life. The LUVOIR would provide either an 8 meter or a record-breaking 15-meter space telescope, while HabEx would send up a 4 meter mirror.

HabEx and LUVOIR are competing with two other astrophysics projects for that Great Observatory designation, and so NAS support now and prioritizing later is essential if they are to become a reality. 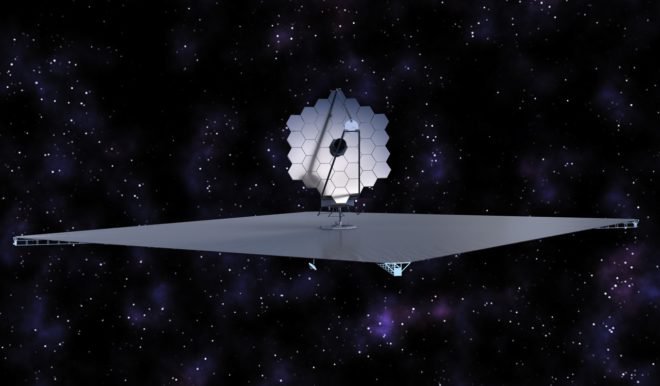 This image was created for a large space telescope feasibility project called ATLAST, but it is similar to what is being discussed inside and outside of NASA as a possible great observatory after the James Webb Space Telescope and WFIRST.Image credit: NASA.

These two potential Great Observatories will be costly and would take many years to design and build. As the study acknowledges and explains, “While the committee recognized that developing a direct imaging capability will require large financial investments and a long time scale to see results, the effort will foster the development of the scientific community and technological capacity to understand myriad worlds.”

So a lot is at stake. But with budget and space priorities in flux, the fate of even the projects given the highest priority in the Decadal Survey remains unclear.

That’s apparent in the fact that one of the top recommendations of today’s study is the funding of the number one priority put forward in the 2010 Astronomy and Astrophysics Decadal Survey — the Wide Field Infrared Survey Telescope (WFIRST.)

The project — which would boost the search for exoplanets further from their stars than earlier survey mission using microlensing– was cancelled in the administration’s proposed 2019 federal budget. Congress has continued funding some development of this once top priority, but its future nonetheless remains in doubt.

WFIRST could have the capability of directly imaging exoplanets if it were built with technology to block out the blinding light of the star around which exoplanets would be orbiting — doing so either with internal coronagraph or a companion starshade. This would be novel technology for a space-based telescope, and the NAS survey recommends it as well. 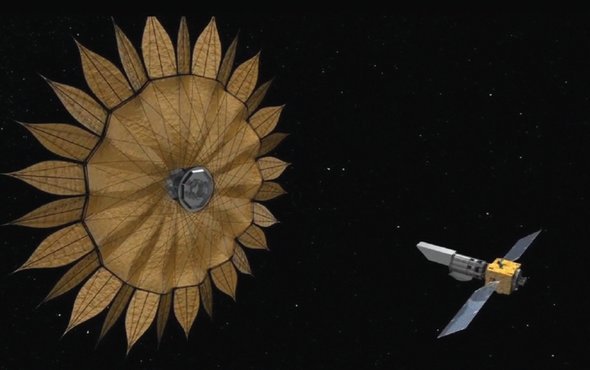 An artist’s rendering of a possible “starshade” that could be launched to work with WFIRST or another space telescope and allow the telescope to take direct pictures of other Earth-like planets.Image credit: NASA/JPL-Caltech.

The list of projects the study recommends is long, with these important additions:

The committee concluded that the technology road map to enable the full potential of GMT and TMT in the study of exoplanets is in need of investments, and should leverage the existing network of U.S. centers and laboratories. To that end, the report recommends that the National Science Foundation invest in both telescopes and their exoplanet instrumentation to provide all-sky access to the U.S. community.

And for another variety of ground-based observing the study called for the funding of a project to substantially increase the precision of instruments that find and measure exoplanets using the detected “wobble” of the host star. But stars are active with or without a nearby exoplanet, and so it has been difficult to achieve the precision that astronomers using this “radial velocity” technique need to find and characterize smaller exoplanets.

Several smaller efforts to increase this precision are under way in the U.S., and the European Southern Observatory has a much larger project in development.

Additionally, the report recommends that the administrators of the James Webb Space Telescope give significant amounts of observing time to exoplanet study, especially early in its time aloft (now scheduled to begin in 2021.) The atmospheric data that JWST can potentially collect could and would be used in conjunction with results coming from other telescopes, and to further study of exoplanet targets that are already promising based on existing theories and findings. 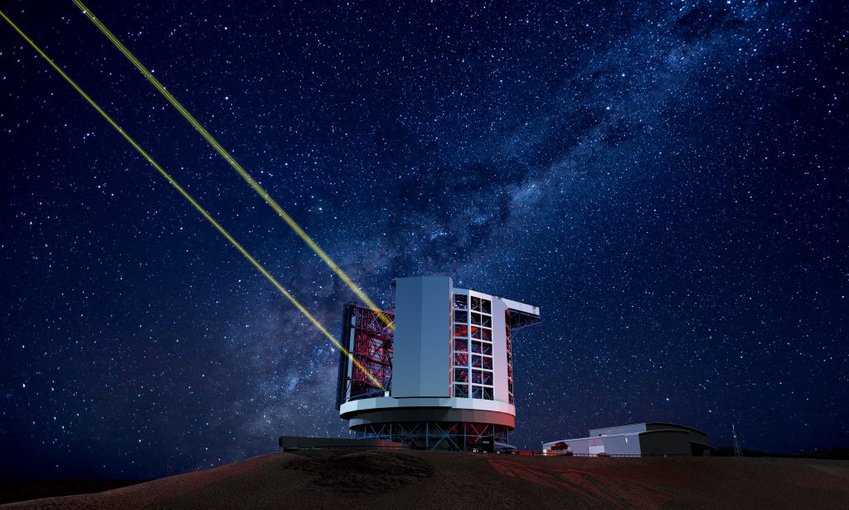 Construction has begun on the Giant Magellan Telescope at the Carnegie Institution’s Las Campanas Observatory in Chile. This rendering shows the 24.5 meter (80 foot) segmented mirror and observatory when completed, estimated to be in 2024.Image credit: Mason Media Inc..

While the NAS report gives a lot of attention to instruments and ways to use them, it also focuses as never before on astrobiology — the search for life beyond Earth.

Much work has been done on how to determine whether life exists on a distant planet through modeling and theorizing about biosignatures. The report encourages scientists to expand that work and embraces it as a central aspect of exoplanet science.

The study also argues that interdisciplinary science — bringing together researchers from many disciplines — is the necessary way forward. It highlights the role of the Nexus for Exoplanet System Science, a NASA initiative which since 2015 has brought together a broad though limited number of science teams from institutions across the country to learn about each other’s work and collaborate whenever possible.

The initiative itself has not required much funding, instead bringing in teams that had been supported with other grants. However, that may be changing. One of the study co-chairs, David Charbonneau of Harvard University, said after the release of the study that the “promise of NExSS is tremendous…We really want that idea to grow and have a huge impact.”

The NAS study itself recommends that “building on the NExSS model, NASA should support a cross-divisional exoplanet research coordination network that includes additional membership opportunities via dedicated proposal calls for interdisciplinary research.”