A Four Planet System in Orbit, Directly Imaged and Remarkable

The era of directly imaging exoplanets has only just begun, but the science and viewing pleasures to come are appealingly apparent.

This evocative movie of four planets more massive than Jupiter orbiting the young star HR 8799 is a composite of sorts, including images taken over seven years at the W.M. Keck observatory in Hawaii.

The movie clearly doesn’t show full orbits, which will take many more years to collect. The closest-in planet circles the star in around 40 years; the furthest takes more than 400 years.

But as described by Jason Wang, an astronomy graduate student at the University of California, Berkeley, researchers think that the four planets may well be in resonance with each other.

In this case it’s a one-two-four-eight resonance, meaning that each planet has an orbital period in nearly precise ratio with the others in the system.

The black circle in the center of the image is part of the observing and analyzing effort to block the blinding light of the star, and thus make the planets visible.

The images were initially captured by Dr. Christian Marois of the National Research Council of Canada’s Herzberg Institute of Astrophysics. The movie animation was put together by Wang, who is part of the Berkeley arm of the Nexus for Exoplanet System Science (NExSS), a NASA-sponsored group formed to encourage interdisciplinary exoplanet science. 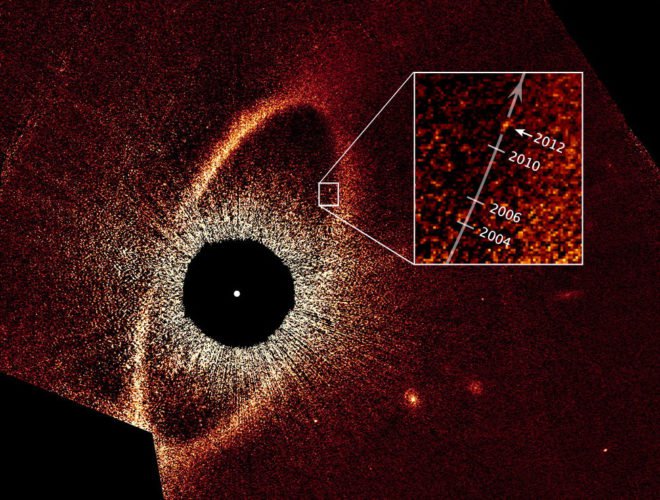 This false-color composite image traces the motion of the planet Fomalhaut b, a world captured by direct imaging. (NASA, ESA, and P. Kalas, University of California, Berkeley and SETI Institute)

HR 8799 is 129 light years away in the constellation of Pegasus. By coincidence, it is quite close to the star 51 Pegasi, where the first exoplanet was detected in 1995. It is less than 60 million years old, Wang said, and is almost five times brighter than the sun.

Wang said that the animation is based on eight observations of the planets since 2009. He then used a motion interpolation algorithm to draw the orbit between those points.

Much can be learned from the motion of the planets, however long it may take for them to circle their sun. Based on the Keck observations, astronomers have concluded that the four planets orbit in roughly Keplerian motion around the star — almost circular, but not entirely.

The planets are quite far from each other, which is to be expected due to their enormous size. Because of those large separations, Wang said astronomers will be watching to see if the system is stable or if some of the planets may be ejected from the system.

Although the first three HR 8799 planets were officially discovered in 2008, researchers learned afterwards that the planets had actually already been observed. The “precovery” had been made in 1998 by the NICMOS instrument on the Hubble Space Telescope, but was teased out only after a newly developed image-processing technique was installed.

The forth HR 8799 planet was found after further observations in 2009–2010. That planet orbits inside the first three planets, but is still fifteen times the distance from its sun than Earth to our sun. (The team working with Marois included Quinn Konopacky of the University of California, San Diego, Bruce Macintosh of Stanford University and Travis Barman of the University of Arizona.)

James Graham is leader of the Berkeley NExSS group, and he was struck by some of the connections between what has been found around HR 8799 and what exists in our own solar system.