About Image
This mosaic of Caloris basin on Mercury is an enhanced-color composite overlain on a monochrome mosaic.NASA/Johns Hopkins University Applied Physics Laboratory/Carnegie Institution of Washington
A depiction of the MESSENGER spacecraft is shown passing near the crater Hokusai and its extensive system of rays.NASA/Johns Hopkins University Applied Physics Laboratory/Carnegie Institution of Washington
NASA-funded research suggests that Mercury could be contracting today, joining Earth as a tectonically active planet.NASA/JHUAPL/Carnegie Institution of Washington/USGS/Arizona State University
MESSENGER features in Issue #3 of Astrobiology: The Story of our Search for Life in the Universe, available at: https://astrobiology.nasa.gov/resources/graphic-histories/Aaron L. Gronstal, NASA Astrobiology 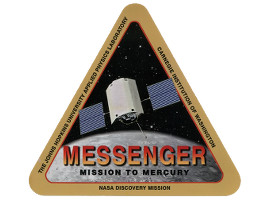 Unlocking the mysteries of planet Mercury

Mercury, Venus, Earth, and Mars are terrestrial (rocky) planets. Among these, Mercury is an extreme: the smallest, the densest (after correcting for self-compression), the one with the oldest surface, the one with the largest daily variations in surface temperature, and the least explored. Understanding this “end member” among the terrestrial planets is crucial to developing a better understanding of how the planets in our Solar System formed and evolved. This information can also help astrobiologists further understand the variety of terrestrial planets that could potentially form around other stars.

Astrobiologists supported by the NASA Astrobiology Program are involved in the analysis and interpretation of data from the MESSENGER spacecraft.

Researchers supported by the Exobiology & Evolutionary Biology program element of the NASA Astrobiology Program, including Oleg Abramov (Astrogeology Science Center, USGS) and Stephen J. Mojzsis (CU Boulder), have worked with data from the MESSENGER Mission to better understand the history and formation of Mercury, our solar system’s smallest terrestrial planet. 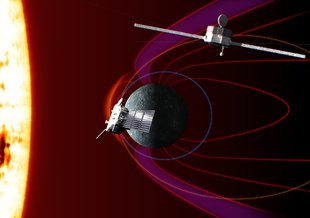 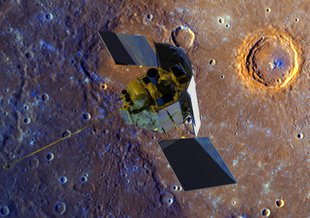 MESSENGER has provided multiple lines of evidence that Mercury’s polar regions host water ice. The permanently shadowed craters near Mercury’s north pole have thermal environments that allow water ice to be stable in craters either at the surface or a few tens of centimeters below the surface.

Magnetic field observations by the MESSENGER spacecraft in orbit about Mercury revealed flow of electric current from the magnetosphere to low altitudes along magnetic field lines. These field-aligned, or Birkeland, currents flow downward at dawn and upward at dusk and have magnitudes 100 times smaller than at Earth. Models for the electrical conductivity of the planet suggest that the currents flow radially through the low-conductivity layers near the surface and laterally from dawn to dusk through more conductive material at depth. See: (Anderson et al. 2014, Steady-state field-aligned currents at Mercury), http://messenger.jhuapl.edu

Through a combination of measurements of Mercury’s gravity field and observations by the laser altimeter, MESSENGER determined the size of Mercury’s core and verified that Mercury’s outer core is molten.

MESSENGER data showed that volcanism played a critical role in shaping Mercury’s surface, where features have been formed by mechanical and thermal erosion of the planet’s surface by hot, quickly flowing lavas. There is a remarkable range in elemental abundances displayed by the volcanic deposits that make up Mercury’s surface. See: http://messenger.jhuapl.edu

This image provides a perspective view of the central portion of Carnegie Rupes, a large tectonic landform that cuts through Duccio crater (133 km diameter, centered at 58.19°N, 307.6°E; north is to the left). The image shows topographic heights as measured by the Mercury Laser Altimeter and surface features mapped by the Mercury Dual Imaging System. Variations in topography are shown in color (red: high-standing terrain; blue: low-lying terrain). Tectonic landforms such as Carnegie Rupes formed by horizontal shortening in response to cooling and contraction of the planetary interior. MESSENGER results have shown that Mercury contracted by as much as 7 km in radius, a number substantially larger than previously believed. See: http://messenger.jhuapl.edu

MESSENGER measurements have revealed that Mercury is surprisingly abundant in volatile elements that evaporate at moderately high temperatures, ruling out many of the models for its formation and early history that had been proposed before the mission. Because potassium is much more volatile than thorium, the ratio of the abundances of these two elements is a sensitive measure of thermal processes that fractionate elements by volatility. For Mercury, as seen in the first graph, this ratio is similar to that for other terrestrial planets at greater distances from the Sun but significantly higher than that for the Moon, which lost potassium during the giant impact that led to its formation. Particularly high potassium concentrations were observed by MESSENGER’s Gamma-Ray Spectrometer at high northern latitudes, as illustrated in the abundance map on the left side of the animation. Relatively high abundances of other volatile elements, including sulfur (right side of the animation), sodium, and chlorine, provide further evidence that Mercury is volatile-rich. The high sulfur contents combined with low amounts of iron on the planet’s surface additionally indicate that Mercury formed from materials with less oxygen than those that formed the other terrestrial planets, providing an important constraint on theories for the formation of all of the planets in the inner Solar System. See: (Peplowski et al. 2012, Variations in the abundances of potassium and thorium on the surface of Mercury: Results from the MESSENGER Gamma-Ray Spectrometer), http://messenger.jhuapl.edu

Hollows are shallow, irregular depressions and are a geologic landform discovered by MESSENGER that appears to be unique to Mercury. Hollows are also some of the brightest and youngest features on Mercury’s surface. The formation of hollows remains an active area of research, but the etched nature of the features suggests that material is being lost from the surface to create the the hollows. See: http://messenger.jhuapl.edu

Mercury’s magnetosphere is highly dynamic because of the planet’s small magnetic field and proximity to the Sun. The interaction of the solar wind with the planetary field generates waves in particles and fields, and reconnection of interplanetary and planetary magnetic field lines and circulation of magnetic flux in the magnetosphere occur 100 times faster than at Earth. The mixing of solar wind and magnetospheric plasma is just one of many processes that cause Mercury’s magnetosphere to be highly dynamic. Features of the simulation are consistent with observations by MESSENGER’s Magnetometer and Energetic Particle and Plasma Spectrometer. See: http://messenger.jhuapl.edu

A puzzle raised after brief observations by the Mariner 10 spacecraft was the nature of apparent bursts of energetic particles. Because of instrument limitations, neither the identity of these particles—ions or electrons—nor their energy was known. MESSENGER’s payload included instruments specifically designed to address these questions. Only after the MESSENGER spacecraft entered orbit about Mercury was the initial part of this puzzle solved. The energetic particles are electrons, not ions, and they have energies from several thousands of electron volts to 100 times that energy. These electrons are a quasi-permanent feature of Mercury’s magnetosphere. The sources and loss process for these energetic electrons remain under study. See: http://messenger.jhuapl.edu

Mercury’s tenuous atmosphere scatters sunlight, and the brightness of the emission is proportional to its content. Scattered sunlight gives sodium a bright orange glow, which was observed by the Mercury Atmospheric and Surface Composition Spectrometer to vary seasonally with Mercury’s distance from the Sun. During parts of a Mercury year, the radiation pressure from the scattering process is sufficiently strong to strip much of the atmosphere and form a long glowing tail. Someone standing on Mercury’s nightside at the right time of year would see a faint orange similar to a city sky illuminated by sodium streetlights. See: http://messenger.jhuapl.edu 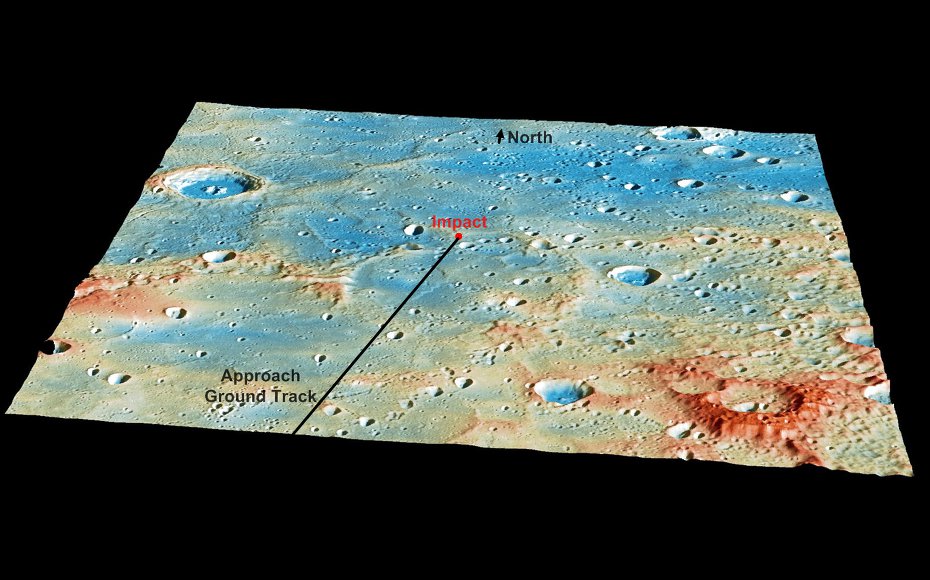 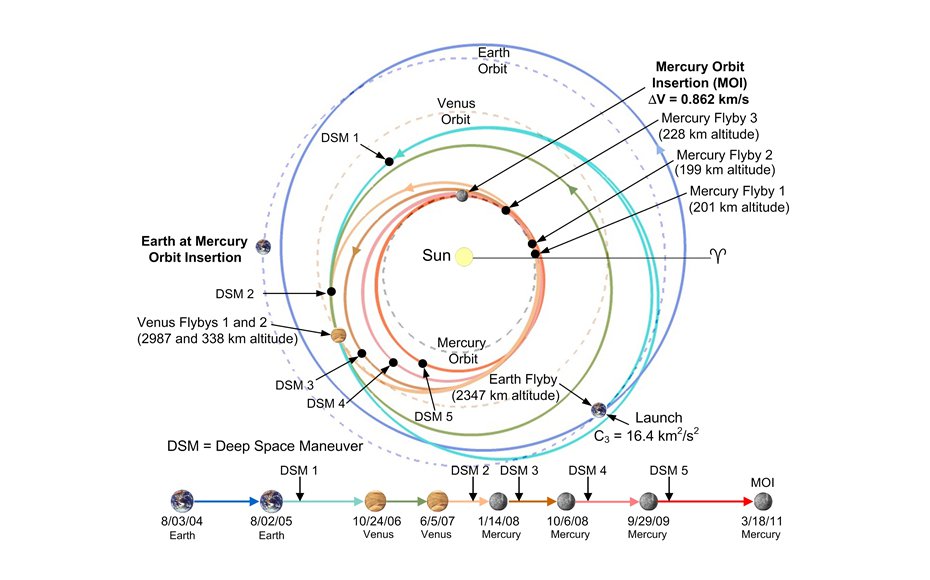 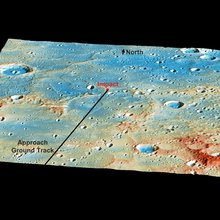 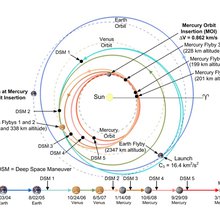 A Smashing End to a Successful MissionMESSENGER mission ended April 30, 2015

After more than 10 years in operation, the MErcury Surface, Space ENvironment, GEochemistry, and Ranging (MESSENGER) spacecraft impacted the surface of Mercury on April 30, 2015, at a speed of more than 3.91 kilometers per second (8,750 miles per hour).

MESSENGER launched on August 3, 2004. It returned to Earth for a gravity boost, then flew past Venus twice. Three Mercury flybys put MESSENGER in position to enter Mercury orbit in March 2011.