Life, Here and Beyond

Astrobiology is the study of the origin, evolution, and distribution of life in the universe. 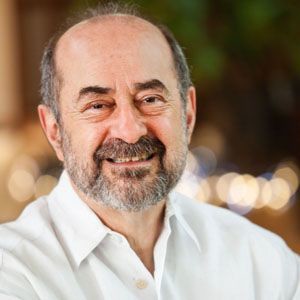 Ask most anyone whether life exists on other planets and moons, and the answer you’ll get is a confident “yes!” Going back decades (and in many ways generations), we’ve been introduced to a menagerie of extraterrestrials good and bad. Their presence suffuses our entertainment and culture, and we humans seem to have an almost innate belief-or is it a hope-that we are not alone in the universe.

But that extraterrestrial presence on regular display is, of course, a fiction. No life beyond Earth has ever been found; there is no evidence that alien life has ever visited our planet. It’s all a story.

This does not mean, however, that the universe is lifeless. While no clear signs of life have ever been detected, the possibility of extraterrestrial biology – the scientific logic that supports it – has grown increasingly plausible. That is perhaps the single largest achievement of the burgeoning field of astrobiology, the broad-based study of the origins of life here and the search for life beyond Earth.

By exploring and illuminating the world of extreme life on Earth, by experimenting with how life here began, by understanding more about the chemical makeup of the cosmos, by testing for habitability on missions to Mars, Jupiter’s moon Europa, Saturn’s moon Titan, and beyond, an enormous body of science is being assembled to analyze and explain the origins, characteristics and possible extraterrestrial dimensions of life. And unlike the ETs and star-ship invaders of popular culture, these discoveries are, and will be, real. 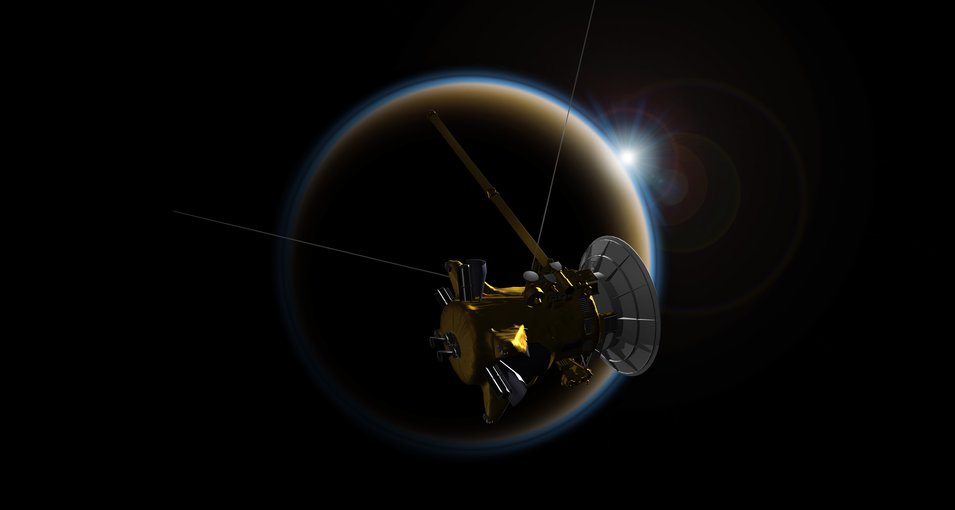 Consider: Both the rovers Curiosity and Perseverance have clearly determined that ancient Mars was significantly more wet and warm, and was an entirely habitable place for microbial life. All the ingredients needed for life as we know it – the proper chemicals, a consistent source of energy, and water that was likely present and stable on the surface for millions of years – were present.

Did microbial life then begin? If so, did it evolve? Those questions remain unanswered, but this much is known: If a second genesis occurred on Mars (or on Jupiter’s moon Europa, Saturn’s moon Enceladus, or anywhere else in our solar system), then the likelihood increases substantially that many other forms of life exist on those billions of exoplanets and exomoons now known to orbit distant stars and planets. One origin of life on Earth could be the result of a remarkable and inexplicable pathway to life. Two origins in one solar system strongly suggests that life is commonplace in the universe.

Sounds of Space
Cassini's magnetometer detection of an atmosphere on Enceladus.

Consider, too, the revolution in understanding that has taken place since the mid-1990s regarding planets and moons in solar systems well beyond ours. Since ancient times, natural philosophers, then scientists, and untold interested others predicted, assumed even, that many other planets orbited their stars. By now more than 5,000 exoplanets have been officially identified – via NASA missions such as the Kepler Space Telescope, the Transiting Exoplanet Space Telescope (TESS), the Hubble Space Telescope as well as ground-based observations — and billions more await discovery. And that’s just in our Milky Way galaxy.

With advances in the instruments and knowledge that make possible the exoplanet hunt, the focus has been increasing refined to identify planets lying in habitable zones – at distances from their host stars that would allow water to remain at least periodically liquid on a planet’s surface. The search for exoplanets was born in the fields of astronomy and astrophysics, but it has always been intertwined with astrobiology as well. As with so many NASA missions, the broad and intense drive to find and understand habitable zone planets and moons both greatly enhances astrobiology and is informed by astrobiology.

Our experience with finding distant planets also makes you wonder: Will the search for the current or past presence of extraterrestrial life someday be viewed as a parallel to the earlier search for exoplanets? Men and women of science, as well as the lay public, intuitively assumed planets existed beyond our solar system, but these planets were identified only when our technology and thinking had sufficiently advanced. Is the discovery of ET life similarly awaiting our coming of scientific age?

This is an artistic rendering of planets orbiting stars in the Milky Way (the planets, their orbits and their host stars are all vastly magnified compared to their real separations). After surveying millions of stars, we’ve concluded that planets are the rule rather than the exception. Credit: ESO/M. Kornmesser

The Past As a Guide to the Future

Astrobiology research is taking place because its time has come. Scientists across the country and around the world are diving into origin-of-life and life-beyond-Earth issues and developing exciting and cutting-edge work. But NASA also has an astrobiology “strategy” describing where the agency sees promising lines of research – from the highly specific to the wide and broad — that the agency might support. A sampling of examples:

• What were the steps that led inanimate materials – rocks, sediments, organic compounds, water – to come together and build living organisms, with replicating genes, cell walls, and the ability to reproduce?

• What led to the proliferation of new life forms on Earth?

• Is it possible to learn from chemicals and minerals on the surface of planets whether microbes might live there, including beneath the planet’s surface?

• Is it possible, likely even, that life exists elsewhere based on elements other than carbon and a system different than DNA? Could such life even exist here on Earth, but is as yet undetected?

These and so many other lines of research shed light on how to identify and find extraterrestrial life, as well as how to understand the origin of life on Earth. The two issues are inseparable. 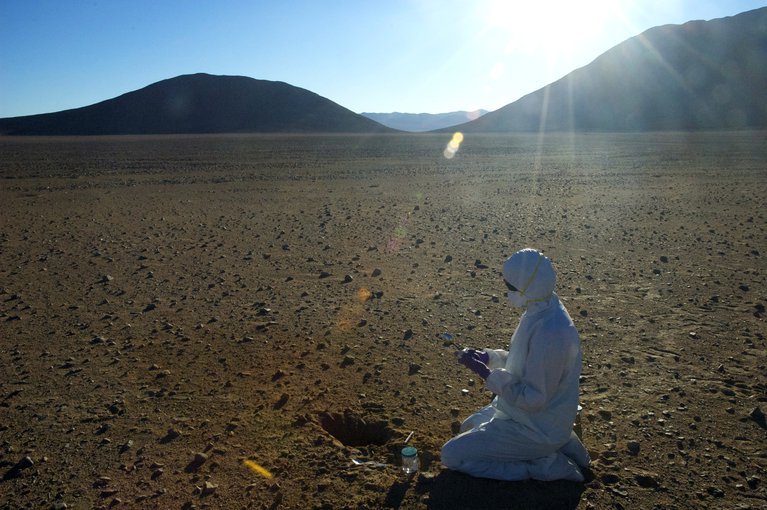 The Atacama desert is one of the driest places on Earth, making it a good Mars analogy. A scientist searching for signs of life (“biomarkers”) in the soil must use clean suits, gloves, masks, goggles, and sterile tools to make sure no contamination ends up in the sample. Image credit: Alfonso Davila/SETI Institute

The World of Astrobiology

While the United States and NASA have pioneered many lines of astrobiological study, we are hardly alone – as is only proper for an effort to address such enormous and universal questions. Few astrobiology missions launch without significant international partnership, and the trend is for ever greater interdependence. The much-anticipated mission to bring to Earth the rock and grain being now being cached by the Perseverance rover in Jezero Crater will feature major roles for both NASA and European Space Agency (ESA).

Astrobiology may sometimes seem most defined by high-profile missions, but often those missions represent years of prior theoretical and laboratory work. And once data from missions have been obtained, more lab analysis and testing are necessary. The data is then challenged and critiqued by colleagues before the results can be released as a significant finding. For instance, it took almost two years of intensive lab work and data analysis before members of the Curiosity science team could announce that they had teased out from Mars drill samples the presence of long-sought organic compounds, the building blocks of life as we know it. 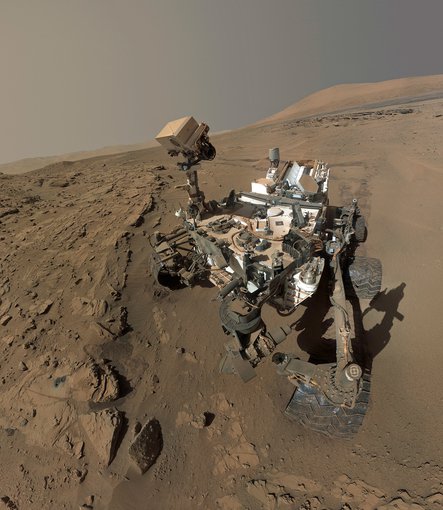 Mars Curiosity rover’s one-year anniversary selfie. The photo was actually composed of dozens of individual images taken between April and May 2014. Curiosity’s mission is to find evidence of past or present habitable conditions on the surface of Mars. Credit: NASA

At the heart of astrobiology is yet another basic and unanswered question: What actually is life? One might think after centuries of study that issue would be resolved, for life on Earth at least. Actually, it’s getting increasingly complicated to come up with an answer that takes in all the “lifeforms” discovered and that might have once existed on our planet. One frequently used definition of life is “a self-sustaining system capable of Darwinian evolution.” But there are literally several hundred more.

Ironically, some astrobiologists argue that we really won’t know what life is until we find an alternative to the basic structure found on Earth – the same DNA, metabolism and carbon-based blueprint shared by all known life. In other words, ET life could tell us what life really is.

A corollary to this line of thinking is the ever-present concern that a rover or lander has, or will, come across an example or signature of life present or past and not know it. This reality helps explain the emphasis that astrobiology puts on understanding the origins and logic of early life on Earth. In addition to its inherent importance, origin-of-life research guides the search for extraterrestrial life.

That NASA is very much in the business of the search for life beyond Earth is by now well known to the public, while the agency’s mission to make progress in understanding the origins of life on Earth is less well understood. Some, however, no doubt wonder why NASA investigates biological questions at all. Isn’t the primary focus of the agency to use robots and astronauts in space capsules to travel in space and explore destination such as the moon and Mars? 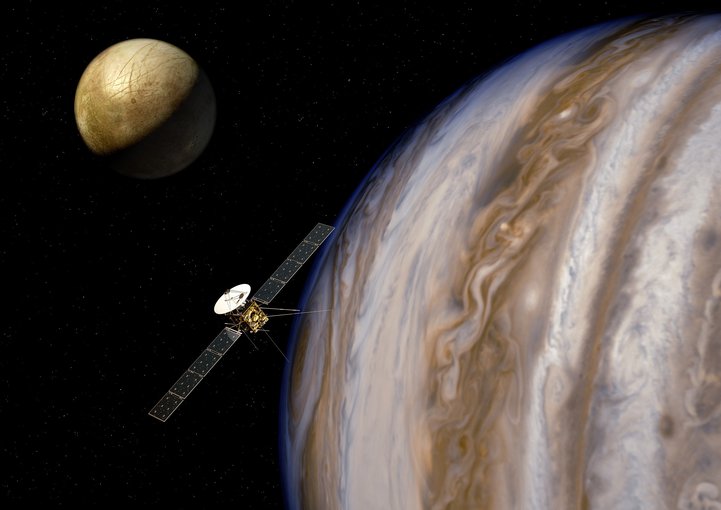 Artist’s impression of the Jupiter Icy Moons Explorer (JUICE) near Jupiter and one of its moons, Europa. Credit: ESA/AOES

Actually, today’s NASA has a much broader portfolio, one that includes the study of classic astronomical topics such as the very early universe and the formation of galaxies, stars and solar systems – all of which will be explored with greatly expanded precision by the James Webb Space Telescope. The JWST was also adapted to allow for newly possible explorations of exoplanets and their atmospheres, which are of paramount interest to astrobiologists.

The search for life beyond Earth is so intertwined with other NASA goals (and is so interdisciplinary by nature and design), it can never really be separated or isolated from them. The Cassini mission to Saturn discovered plumes spitting out of the moon Enceladus, and the Hubble Space Telescope did the same for Europa. Both plumes tell of an inner water world, and so are important to planetary science as well as astrobiology. The Kepler mission identified thousands of exoplanets in a small segment of the constellation Cygnus, 500 light years away, adding enormously to our understanding of the inventory and nature of distant planets. Included in those discoveries are the detection of rocky planets within the habitable zones of their central stars. TESS has also substantially added to the count of exoplanets, with more than 5,000 new exoplanet candidates.

The central goal of astrobiology is to find evidence of past or present life beyond Earth, if it ever existed. But there are countless mysteries about planets and moons, about solar systems, about galaxies and about the makeup of the space between them that inevitably will be confronted and hopefully unraveled along the way. Ultimately, the search for extraterrestrial life is possible only as part of an exploration of the makeup, the dynamics, the history and the many as yet unknown wonders of the cosmos. 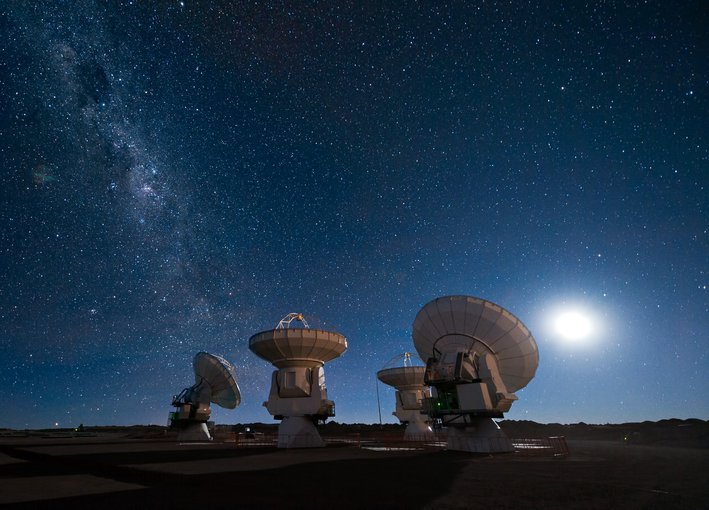 Four antennas of the Atacama Large Millimeter/submillimeter Array (ALMA) gaze up at the stars and the band of the Milky Way. Astronomers can use such telescopes to study star formation, as well as the origins of galaxies and planets. Credit: ESO/José Francisco Salgado
Written byMarc Kaufman

Marc Kaufman is an experienced journalist, having spent three decades at the Washington Post and the Philadelphia Inquirer, and is the author of two books on searching for life and planetary habitability. He also writes the Many Worlds blog.